As a member of the hugely popular idol group Wanna One which disbanded last year, Ong Seong Wu is now back in Malaysia to charm his fans as a solo artist! Fresh from the fan meeting in Bangkok last week, the next stop in his tour is Kuala Lumpur. The heavy rain didn’t stop approximately 4,000 fans from turning up in Axiata Arena, Bukit Jalil just to share up-close and personal moments with him. He said it’s good to be back in Malaysia to meet the fans after a while and expressed his feelings with cute facial expressions. He already prepared a game session and performances for the night.

The fan meeting started with him being given a tablet with several apps on it. The first app he opened was “OngTalk”. This application (similar to KakaoTalk) was a Q&A session and among the questions asked was his secret of good looking features, favourite local food, pros and cons performing solo, brushing teeth habit and his thoughts if he was sent back to Sabah. He also showered the fans on the spot with his signature freestyle dance moves. Next application was “Ongstagram”. On his passion in photography, he kindly explained the stories and meaning behind all pictures displayed on the screen, some which can be found on his personal instagram.

He also mentioned the most difficult photo to take was during his vacation in Da Nang. He literally had to wait for quite some time to get the pictures of a swimming pool taken. Then he brought out his phone and had a ‘selca’ time with fans. The fans then surprised him with a basket of flowers and he truly loved it.

The final application was “OngPlay” which consisted of Wanna One’s hit songs medley. He showed us the key-point moves when the songs were played. He said it’s weird to dance alone without other members. He surely missed them a lot! 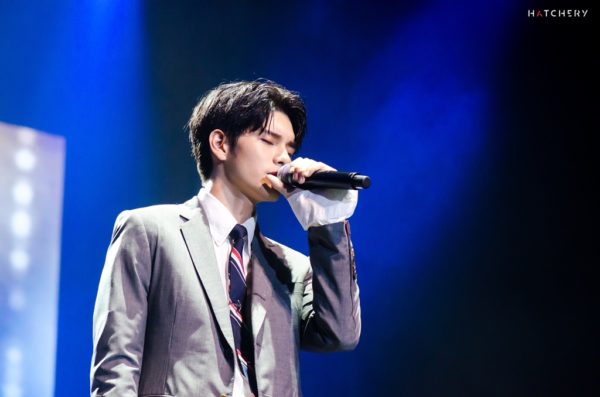 Up next was a solo stage with “Please” (제발), originally by Lee Sora. This song really showcased his powerful voice.

The next segment was “I will catch a star for you”, consisting of 3 missions. The first mission was “The claw game” where Seong Wu managed to get 2 cute dolls (out of his 5 attempts) and lucky randomly selected fans get the kissed-signed dolls. The second mission was “What’s in the coffee” where he had to pick a cup of macchiato latte (he picked the salty one, ouch!), hold his expression for 7 seconds and if he was able to make it, lucky fans will get a gift.

The last mission was “Let’s sing a Malaysian Song”. He learnt and cutely attempted to sing “Rasa Sayang” with the help of the fans. As he learnt what “Sayang” means, he cutely said “Sayang Kamu” to his fans. Then he serenaded the crowd again with another song called “Love This Moment”. He captured the fans’ hearts with his mellow voice, it seems like ballad songs really suited him. We can’t wait for his debut album in the future!

After he finished his song, the fans present to him a fan-made video and a fan-made project. He was so touched and thanked the fans for being a flower road to him. Then video clips showing his journey in the entertainment industry was played while he went backstage to prepare for the next performance.

Seong Wu came back on stage with a sleek black outfit for his last performance with another Bruno Mars track “That’s What I Like”.

The fan meeting ended with a hi-touch event with all fans and a group photo session with randomly selected winners.

Thank you Hatchery for the invitation and we hope to see more K-pop gigs in Malaysia soon!