It’s been 5 years since Oh!K channel started airing Korean dramas and varieties on our shores and they sure know how to celebrate. Who better to celebrate with but with the fans who have been supporting. Oh!K flew in actor and cast of I Live Alone, Sunghoon to Malaysia to celebrate with and the rest is history. 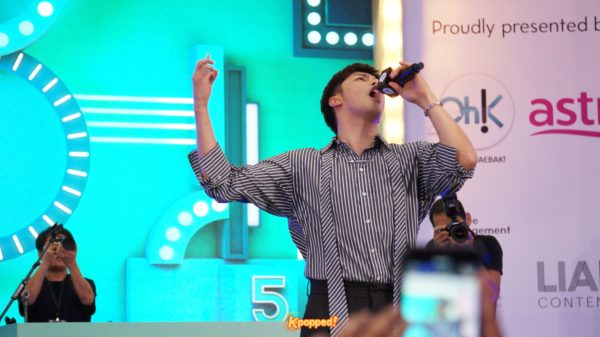 With Sunghoon in attendance, the show started with a short Q&A and off to fun and games with lucky fans. Games includes the guessing game and a short segment of ‘fan service’ in which Sunghoon does things with the fans according to what’s written in the cue card. One dan even got to look into Sunghoon’s eyes and even though both were shy,  the fans who were watching all wishes that they were in that luck girl’s shoes. Signing an autograph for a fan

An evening with Sunghoon wouldn’t be perfect without a segment of him hitting the turntable. Fans were excited to see DJ ROIII (Sunghoon’s DJ alter ego) perform his stuff and he excites them more with “Oh!K told me to prepare for a 10 minutes performance, but I prepared 30 minutes”.

Lucky fans get to take group photos and high touch with Sunghoon. And that's the end! #OHKTURNS5 #SUNGHOONINKL #SUNGHOONINMY pic.twitter.com/lXmIUl7ySl

The celebration ended with group photo shots and high touch with selected lucky fans. Congratulations Oh!K for the anniversary and here’s to more celebrations in the future!