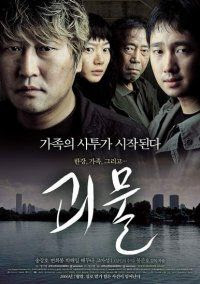 In this monster movie, the focus on family unity is unmistakable and you’re bound to sympathise with the imperfect protagonist played by Song Kang-ho (송강호). The dark humour is hilarious – check out the mourning scene, how can tragedy be so funny? Genius!

Also, you don’t have to wait long before getting an eyeful of the monster as you’re introduced to it almost from the get go!

Irresponsible dumping of formaldehyde creates a monster that rises out of the Han River. It snatches a girl named Hyun-seo, and when the authorities are unwilling to help the family find her, they band together and do whatever it takes to get her back.

It played at local cineplexes last year so the only way you’ll get to watch it now is by getting the DVD.