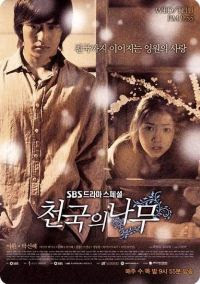 The drama starts June 26 (next Tuesday) on 8TV!

Back in 2003, Lee Wan (이완) and Park Shin-hye (박신혜) appeared as the younger counterparts of the leads in Stairway to Heaven. They were so well-liked by the audience that producer Lee Jang-soo decided to do a follow-up of that drama with Tree in Heaven, casting Lee Wan and Shin-hye as the leads.

The romance drama is a collaboration with a Japanese production company. It was entirely shot in the land of the rising sun and the Korean actors even had some Japanese dialogues.

Hana is a bright and optimistic Japanese teenager. When her mother remarries a Korean man, she tries to establish a connection with her eccentric stepbrother Yun Suh. He dislikes her initially, but eventually warms up to the charming girl.

The pair becomes even closer when their parents leave for their honeymoon, leaving them with their spiteful aunt and cousin Maya. Also, Yun Suh starts to develop feelings for Hana, who then leaves for Tokyo with her admirer Asahi Uchida right after graduating high school. She loses contact with Yun Suh, they live separate lives…but are thrown together again, along with Maya, years later.