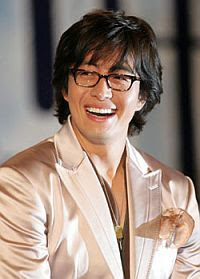 I’ve only seen him in one film and yeah, I admit that he’s a good actor. Yes, yes, I know, which tempurung (Bahasa Malaysia for coconut shell) was I living under back in 2002 that I didn’t watch Winter Sonata?

Anyway, this 35-year-old keeps his personal life very private. All I got on him is an ex-girlfriend named Lee Sa-gang and that his apartment caught fire due to a short circuit. Not sure when this happened but nobody was home at that time so fan girls, Mr. Bae is just fine.

Ladies (and some gentlemen out there), quit drooling please as I present to you Mr. Bae Yong-joon.