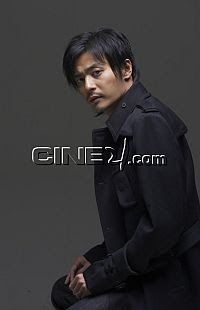 Mr. Jang’s foray into showbiz began with a talent contest, which led him to his TV debut in Our Heaven (1992). Five years later, he made his silver screen debut in Payback.

Stardom only came in 1999 when he landed the role of a young detective in the critically-acclaimed Nowhere to Hide. His popularity increased when he starred in the TV drama All About Eve (2002).

Since then, the 35-year-old is one of the most sought after and respected actors in South Korea. He has already toplined a couple of box office smash hits: Friend (2001) and Taegukgi (2004).

Chinese director Chen Kaige chose him to play the slave named Kunlun, a swift runner, in his wuxia-romance disaster The Promise (2005). And boy, that flick sucked. Big time.

Mr. Jang has yet to make a movie since then. Maybe he’s still reeling from the collaboration with Chen Kaige?