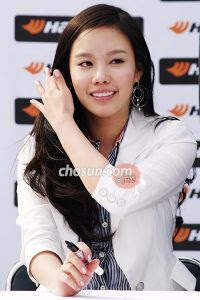 The actress shot to fame because of a fat suit. OK, OK, it was more than a fat suit. Kim A-joong, the star of 200 Pounds Beauty gained popularity after appearing as the overweight protagonist in the rom-com.

The current “it” girl now models for Guess, had a secret meeting in Hong Kong for a possible movie deal and will apparently have her movie remade in Hollywood. Lady luck is sure beaming down on this 25-year-old!

Ladies and gentlemen, I present to you the 106 pound beauty:

Korean stars come together for I Love Asia song project

Stars at the 45th Daejong Awards in Seoul

Stars at the 2007 Chunsa Film Awards