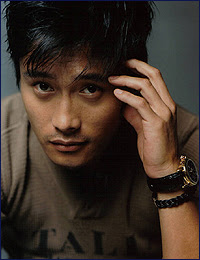 Did you know that his official site has not been updated since 2005? Well, now you do. And when you click for the site’s English version, his biodata is still in Korean. Get with the program, people!

Anyways, after much surfing, I’ve got some tidbits on the 37-year-old. It all started in 1991 with the TV drama Asphalt in My Hometown. However, Mr. Lee only started to make heads turn with the release of the movie Bungee Jumping of their Own (2001).

The actor, who also sings, speaks fluent English and Korean and is able to converse in French and Mandarin. Also, he has a very strong following in Singapore. During his visit to the neighbouring country in 2005, the star launched his biography entitled Limited, Brave and Human, a 3-disc DVD set. In it, the star talked about life and his acting career.

On the personal front, Mr. Lee’s father passed away in 1997, when he was shooting the movie Harmonium in my Memory. His younger sister, who is eight years his junior, was the 1st runner-up in the 1996 Miss Korea beauty contest. Must be a helluva looker. Oops, pardon my French.

Of course, everybody knows about his short-lived romance with his All In co-star, Song Hye-kyo.

The Japanese ladies love Mr. Lee. He held a concert in Budokan, Japan earlier this year and celebrated his birthday with 16,000 of his fans in Tokyo last week.

Lee Byung-hun is the angel of death?