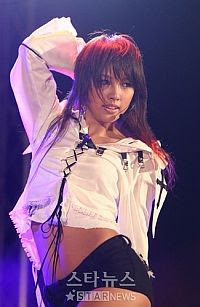 Sexpot Lee Hyo-ri is touted to be the highest paid female singer in South Korea after inking a 3-year contract with M-Net Entertainment for 2.2 billion won (RM8.27 mil) in Nov 2006.

Her affair with the entertainment industry started in 1998 when she was part of the successful girl group Fin.K.L (Fine Killing Liberty – huh?). Apparently, she was a last-minute addition to the band and was discovered while taking sticker pictures with her friends. See that? Taking sticker pictures can bring you fame and fortune! May wonders never cease.

In 2003, Hyo-ri released her first solo album entitled Stylish. She bagged more than seven awards at the prestigious Daesang Awards (South Korea’s music awards) for the album. She was white hot at that time and the media even dubbed 2003 “The Year of Hyo-ri”.

There was a controversy last year when Hyo-ri released her sophomore solo album, Dark Angel. The songwriters of the album’s first single, Get Ya, were accused of plagiarism because the track sounded very much like Britney Spear’s Why Don’t You Do Something.

And so Hyo-ri and her management did (something), they ditched promotional efforts for that nasty single and hyped up her next single. To cut a long story short, both the single and album were not successful.

Humph, like that’s going to stop this sex kitten, who has turned to acting. She appears in the drama If In Love…Like Them with Lee Dong-gun. Apparently, the drama faced some problems too and the Korean Broadcasting Committee even banned it from being aired in South Korea again.

Nonetheless, this sexy star has enough endorsement deals and a grand master plan to keep her afloat. So no worries, fan boys…and girls. Recently, the 28-year-old was chosen as the first Asian model for Calvin Klein Jeans.