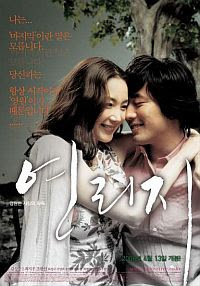 It’s a weepy romance that begins with a looming tragedy, but as the flick unfolds, we are introduced to yet another – wait for it – tragedy! It’s so manipulative it just ruins the humorous set up at the start.

I’m too much of a desensitised moviegoer to appreciate the flick or sympathise with the characters.

Does anyone know if the leading lady, Choi Ji-woo (최지우), had a nose job? Because I kept staring at her nose during the flick as it looks unnatural. If my guess is right, my advice to the stars is: Boycott that surgeon! He’s doesn’t do good work!

Min-su (Jo Han-seon) is a womaniser who turns over a new leaf when he meets Hye-won (Choi Ji-woo). She’s a happy-go-lucky girl who is living life to the full; probably her rebellious streak showing for being hospitalised.

Min-su naturally falls for the spirited lady but she is apprehensive about starting a romance since she knows that it will be cut short by her terminal illness. Oh, how now?