Watch out for these groups set to make their debut in August.

An all-girl group made up of 9 members! This, from the very same people who brought you the 13-member boyband SuJu. 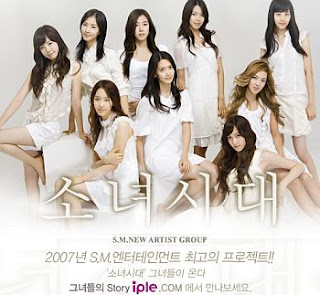 S.M. Entertainment is set to unleash So Nyeo Shi Dae (which translates to The Era of the Girls) early next month. The agency used a clever gimmick to tweak interest by unveiling the members one at a time through videos that are available on the Internet. The girls gave a sneak peek performance on a TV show on July 19 in Korea.

A quartet under M.Net Media, the same label as SG Wannabe, Seeya and F.T. Island. The R&B group is made up of Cho Young-su, Kim Do-hun, Min Myoung-ki and Han Song-hu (dunno who’s who, sorry). They are from ages 17-25 and their debut album contains 14 tracks.

You can show them some love at their MySpace fansite.

Apart from the above, JYP Entertainment will also be introducing a boyband. No juicy info on them yet.