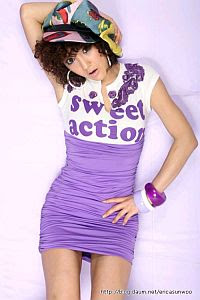 Bada will soon take centrestage and appear in musicals. The 27-year-old started her career in entertainment as the lead vocalist of the now defunct trio S.E.S.

Apart from Bada, the girl group which was formed in 1997, was made up of Eugene and Shoo. After a very successful run as a trio, the girls decided to part ways in 2002. Bada and Eugene pursued solo music careers, while Shoo pursued acting.

In 2006, the singer reinvented herself for her 3rd album Made in Sea. She shed her feminine image for an androgynous one (really?) but the transformation didn’t pay off. The album still did poorly. However, it was given a re-release because of its successful second single, V.I.P.

The latest news is that Bada’s embarking upon a career in theatre. Could it be due to the lacklustre album sales?