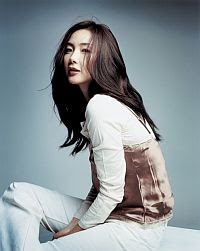 This talented actress has worked alongside Bae Yong-joon, Lee Byung-hun and Kwon Sang-woo – popular actors in their own right.

Born Choi Mi-hyang, the Winter Sonata actress changed her name to Choi Ji-woo when filming the 1995 drama series War and Love. Her foray into showbiz began in 1994 when she was discovered at an audition organised by MBC.

She debuted with War and Love and the following year starred opposite Bae Yong-joon in First Love. However, she only became popular after playing an orphaned girl suffering from leukimia in Beautiful Days (2001), in which she starred alongside Lee Byung-hun.

In 2002, she again co-starred with Bae Yong-joon in the popular drama series Winter Sonata, which apparently triggered the Hallyu in Japan. As a result of that, Choi has a very large fan base in the land of the rising sun. Her Japanese fans sometimes refer to her as “Princess Ji-woo”.

Choi’s star power increased in 2003 as she appeared opposite heartthrob Kwon Sang-woo in drama Stairway to Heaven.

The 32-year-old’s latest drama series aired over MBC in Korea from May 12 to July 15, 2007. It is entitled Air City, in which she plays a CEO of an airline company.