Clazziquai’s fusion music started off as an experimental pet project for the trio’s leader Kim Sung-hoon, a clasically-trained musician who is an avid fan of the Jazz genre.

However, the talented musician wanted to create a unique sound, which led him to marry various genres such as acid jazz, chill-out lounge, electronica and even house. The result? A unique and versatile sound that is distinctly Clazziquai is birthed. 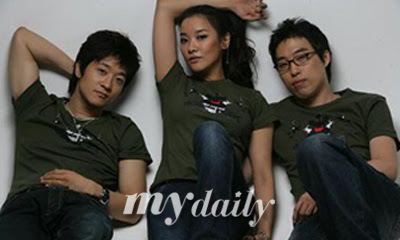 The trio (pic above from left: Alex, Horan & DJ Clazzi) bounced their music around the underground circuit for a bit until 2004 when it released its first official album, Instant Pig. It sold over 80,000 copies and since then, their music has been used for CFs and movies. The trio was embraced by mainstream music when it contributed two tracks to the OST of hit drama series My Name is Kim Sam-soon.

Their 2nd album, Color Your Soul, was released in 2005 and in June 2007, the trio released their 3rd album, The Love Child of the Century. The band is already well-received in Taiwan and Japan. Hit this link if you want to hear what they sound like …or you can head on over to their official MySpace site.