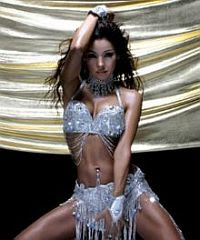 She lied about her age (shaved 6 years off her real age), posed naked for a photobook and suffered lacklustre record sales for most of her career but 35-year-old Shim Mina, who is better known as Mina, may be bouncing back.

Fame was thrust upon Mina by a Korean flag, which she fashioned into a wrap-around skirt. No, really.

She became famous when photogs snapped her pic during a match at the 2002 World Cup in Korea. Mina was there to support her countrymen wearing a very eye-catching outfit (pic below, right). Apparently, she instantly became the centre of attention worldwide after the pic was beamed across the globe. Yo, football kakis (colloquial Bahasa Malaysia for “fans”), can you remember the pic?

Mina tasted fame, and wanted more! So she signed up with a recording company and released her debut album, Rendezvous, in the fall of 2002. The single Answer the Phone, which is a cover of another group’s song, flopped. So Mina went under the radar for a while before emerging again in the summer of 2004 with her 2nd album, Re:turn to Mina. The album was a little more well-received as the single Turn made waves. 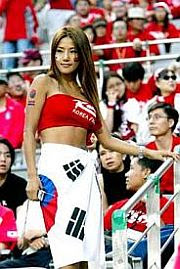 Her 3rd album was released under a different recording company and the single Kiss Kiss came out in the fall of 2005. Mina adopted an even sexier image and worked hard for her album. She spent 3 months in Turkey to learn how to belly dance! You can see her shaking her booty in the MV of the single.

Nonetheless, lady luck seems to be frowning upon Mina because the album also flopped – belly dancing or no belly dancing. She then tried to woo the European market with the release of an English single and even created a MySpace site for that. I don’t think she went far with the endeavour.

In 2006, she launched a nude photo album to “inspire” Korean athletes. Oh-kay.

Her 4th album, Minastasia, was released in July this year while her Chinese album (not sure if it’s a Chinese version of the 4th album or a bona fide Chinese album) is set for an August release. The good news for Mina is, preorder sales for the album is very encouraging. Perhaps this is the (other) lucky break Mina is waiting for?