Been a little under the weather lately and when one’s down with a nasty flu, one tends to gravitate towards um, junk food? Well, I gobbled down a pack of Onion Rings (양파 링 – yangpa ring) one night and was pleasantly surprised that it was rather bland compared to the locally made junk food such as Twisties, Cheezels or Chickadee.

While the locally made junk food is usually laden with flavouring (you can actually sweep up the powdered flavouring with your fingers – yum), there wasn’t any flavouring residue at all in the Korean snack I had. 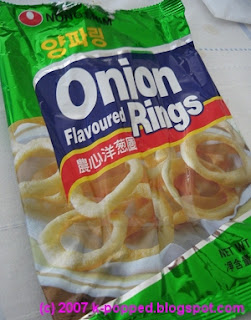 Hmm, a healthier alternative then? Less MSG, less artificial colouring and flavouring? It could be just this one snack I tried; will only get a proper conclusion once I try other Korean snack foods.

For now, if you want a non-oily, non-MSG covered, “healthier” snack, you can try the Onion Rings by Nong Shim above.