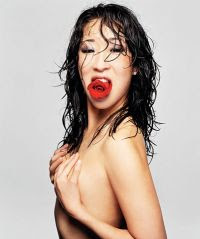 She isn’t Chinese, she’s Korean-Canadian. Sandra Oh was born to Korean immigrant parents – Joon-soo (John) and Young-nam – in Ontario, Canada. Her parents were married in Seoul and both attended graduate school at the University of Toronto. Sandra’s Dad is a businessman while Mom is a biochemist.

Sandra began her career as a ballet dancer and eventually studied drama at the National Theatre School in Montreal. She outshone 1,000 hopefuls to bag the titular role in the Canadian TV production, The Diary of Evelyn Lau (1993). However, Sandra became more popular in Canada after starring in the film Double Happiness, for which she won the Genie Award for Best Actress.

The American audience became acquainted with the talented actress through popular flicks Under the Tuscan Sun and Sideways. However, she also appeared in the lesser-known Dancing at the Blue Iguana, playing a poetry-writing stripper. She has several nude scenes in that film.

In 2006, she bagged a Golden Globe Award for Best Supporting Actress and a Screen Actors Guild Award for Female Actor in a Drama Series for that role. She also received a 3rd Emmy nomination for her work on the series in July 2007.

On the personal front, Sandra was married to Sideways director, Alexander Payne, from 2003 to 2006. They separated in 2005 and divorced in Dec 2006. Currently, the 36-year-old is reportedly dating musician Andrew Featherston.