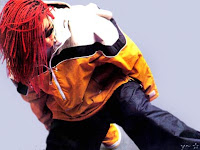 I absolutely adored Seo Taiji when I was an angst ridden teenager back in the day… now I’m not so sure. Nevertheless, I shall grant him a spot here in the K-Popped profiles as he is one of the few Korean rock musicians available.

Eclectic and diverse Jung Hyun-cheol (정현철) began his career in music at 14 playing for amateur rock bands in South Korea. In 1990, Jung was recruited as a bassist by Korean rock band, Sinawe (시나위). After just a year, Jung left Sinawe to form his own band, Seo Taiji and Boys (서태지와 아이들), with friends Lee Juno and Yang Hyun Suk.

For 5 years they made dance hits and rocked Korea until they disbanded in 1996. Many fansites I browse tell me that these guys really opened Korea’s youth to an entirely new style of pop music. In fact they “revolutionized the Korean music industry”. Did they really? Check out their song, Nan Arayo, covered by Bi, Se7en and Lee Hyo-ri.

Now alone, Seo Taiji moved to New York and went to work on his career debuting his self titled solo album in 1998. Since then, he has released 5 albums, his most recent, Seo Taiji Live Tour 04, in 2004.

My favorite album is Ultramania. Although it is apparent that Seo Taiji has picked up and infused many popular American rock styles into this album, his experimentation and mixing of genres is what gives his music its identity. An acquired taste this one is.