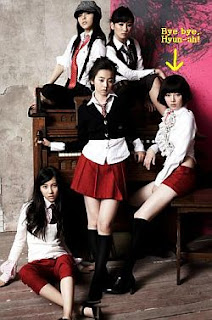 Oh the pressures of stardom! The Wonder Girls quintet is temporarily a quartet after Hyun-ah decided to leave the group. The announcement was made two days ago (July 30) and early reports say that Hyun-ah will be replaced by another one of JYP’s trainee, Park Sun-young.

The Wonder Girls is the brainchild of Park Jin-young, the man behind JYP Entertainment. Each of the members trained under the agency for about a year or two, with the exception of Ye-eun, who only had 3 months training.

The group debuted with the mini-album Irony on Feb 13, 2007. They also have their own reality TV series entitled MTV Wonder Girls. The show – which aired on Dec 22, 2006 – is currently in its second season.

Hyun-ah, who has reportedly fainted on numerous occasions, cited her declining health for leaving the group. Girl, it’s because you’re underweight. No healthy chick who is 163cm tall weighs a mere 45kg! Eat more.

However, there’s also the rumour that Hyun-ah isn’t getting along with the other girls.

Well, whatever the reasons are, here’s a toast to a young lady who has guts to say “no” when hemmed in by the pressure and here’s hoping she starts to eat normally like the rest of us. All the best in whatever you do, Hyun-ah, at 15, the world is your oyster. 아자 아자 화이팅!

Here’s a mini-profile of the members, including Hyun-ah:

Last but not least, the one who is leaving: