Miss Bootylicious herself, Beyonce Knowles, will be taking Korea by storm when she performs her first-ever concert in the country on Nov 9 and 10. She will be performing at the Olympic Park gymnastics arena.

The shows are part of the songbird’s 2007 B’Day World Tour, which is her first major outing as a solo artiste after Destiny Child disbanded. 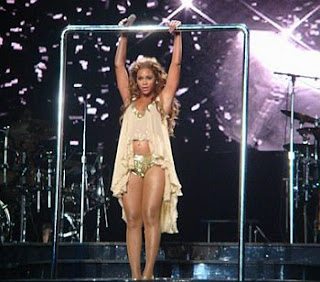 So far, Beyonce’s concert has had its fair share of mishaps. During an Orlando concert in July, the sexy singer fell down a set of stairs! And more recently, the Net was abuzz with news of her wardrobe malfunction during the concert in Toronto, Canada.

Beyonce’s fluttery dress flared up while she gyrated onstage, revealing a blur of flesh. Yes, you can find the footage on YouTube. So, did she or did she not flash her fans?

Apparently not, as the diva reportedly laughed off the speculations and insisted that she was wearing a flesh-coloured bra.

Yeah, I believe her. Have you seen her energetic dance routines? Only insane women would jiggle about so much without proper support.