Envy almost caused the downfall of this R&B duo. Korean-American Brian Joo (pic below, right) felt that Hwanhee – the surgically-enhanced Korean stud – was receiving more attention and recognition than him. 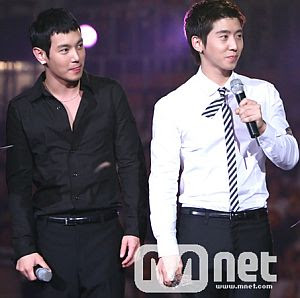 Brian then suggested that they go their separate ways after their first contract expired and that irked Hwanhee so much, the pair got into a heated argument. But that’s history. The duo apparently got their differences sorted out as they are still together.

The pair debuted in 1999 under SM Entertainment. A year earlier, Brian auditioned while he was still studying in a New Jersey high school in the US of A. Meanwhile, Hwanhee (or Fany – goodness, that is too sissy a name for my liking) was encouraged to audition by the label’s staff member at his high school festival. And that’s how Fly to the Sky got its wings.

While their debut album Day by Day wasn’t a smash hit, the pair was noted for singing mid-tempo ballads. Following their debut, the duo consistently released albums and their popularity gradually increased.

Their third album, Sea of Love, was released in 2001 and it featured a track titled Condition of My Heart, which was written by Brian McKnight. Their sound matured and the pair adopted a more R&B feel, leaving behind bubblegum pop. The gamble paid off as it gave them greater success.

A tragedy occurred just before the release of the duo’s 4th album Missing You. Fly to the Sky’s manager died in a car accident and the guys were shaken, especially Hwanhee, who cheated death by a few hours. The singer was actually travelling in the same van with his manager before the accident occurred.

In 2003, Brian stirred up controversy when he was misquoted during a radio interview. At that time, anti-American sentiments were high because an American soldier had murdered two teenage girls.

When asked for a comment on the topic, he reportedly said: “Don’t insult the United States, because I am an American.” However, the guy apparently meant that while the American soldier should be brought to justice, he did not want relations between Korea and the United States, his home country, to become strained.

Hmm, how did he get misquoted so badly? Something fishy’s going on. Brian, next time steer clear from touchy issues like this. Just say “No comment” or act dumb…go “Du-uh” or something. It’d save you a whole load of cra-, trouble. 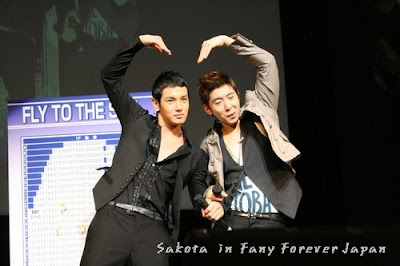 Apart from Fly to the Sky, the guys also have their own pet projects. Hwanhee made his acting debut in Over the Rainbow, a 2006 drama series where he plays a cocky singer named Rex. Check it out if you want to see a pre-operation Hwanhee.

Meanwhile, Brian released a solo album in December 2006. I guess he still has something to prove, as this was the reason he gave for the album:

“First of all, I just wanted to do it. I also wanted to show that I could (be successful) as Brian. When Fly to the Sky sang, many think Fany (Hwanhee) is the main vocal, and that I am the second vocal and a rapper. I won’t mention his name, but one producer once said to Fany, ‘You are a really good singer’, when he only said ‘Good job’, to me. So I wanted to prove that I could do it too.”

Awww Brian, still feeling a little inferior, are we? Been there, done that, bought the T-shirt already. That’s why K-popped! is going to show support for the underdog by mentioning you first in the profile section. Step aside, Hwanhee. You’re still a stud, but please, just step aside for a moment.