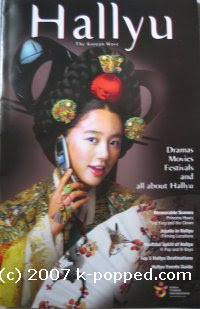 South Korea’s entertainment industry is the thrust of the Hallyu. Whether its movies, TV dramas or music, the world is taking notice of the peninsula because of its glamourous (albeit sometimes plastic) stars.

Surgically-enhanced beauty aside, outsiders – including us here at K-popped! – cannot help but be impressed by the quality of entertainment we have been getting from Hallyuwood. 😉

While the dramas and movies can get cringingly soppy, and every other singer seems to be singing about lost love, one cannot deny the fact that a lot of passion and hard work go into the tremendously entertaining works that have been washing up our shores through the Korean Wave.

This booklet (pic above) introduces Hallyu to the masses through tourism. Filming locations of dramas and movies have become highly popular tourist destinations. It doesn’t matter if it’s a period drama/movie or one set in modern times, many from all over the world flock to these filming locations to stand on the very same ground their fav Hallyu stars have stood on. The Winter Sonata holiday packages available in Malaysia bear testament to that.

At the start of the Hallyu booklet, we are introduced to the filming locations of Princess Hours (drama) and The King and the Clown (movie that shot Lee Jun-ki to stardom). Then, we are given a peek at Jejudo Island – a popular island paradise in Korea. Dramas shot at the island include Lee Young-Ae‘s Jewel in the Palace and Bae Yong-joon‘s currently-airing (in Korea) historical drama Taewangsasingi. 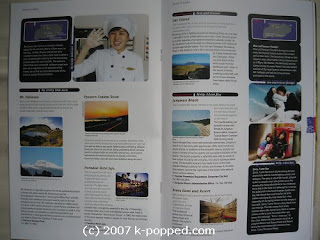 The booklet continues to introduce us to other K-entertainment such as plays and K-pop (of course!). It provides a list of official websites of selected K-pop stars such as Rain and Se7en…hmm, some of the URLs are dated though.

There are also brief write-ups on record shops and stage shows in Korea. The latter sounds really interesting. Is the one featuring B-boys (The Ballerina Who Fell In Love with a B-boy) still playing? Oh, and the hilarious Jump! is mentioned as well.

Apart from all that, readers will also be made privy to the Top 5 Hallyu destinations in Seoul. Wanna do some star gazing? The booklet recommends Cheongdam-dong. 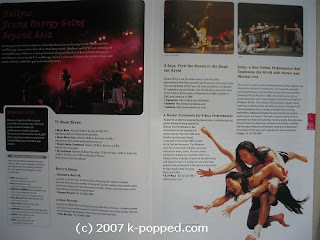 You can also read about the various exhibitions and film festivals, such as the Pusan International Film Festival, in the Hallyu booklet.

I got my copy at the recent MATTA Fair. Yes, it’s from Korea Tourism Organization (KTO).