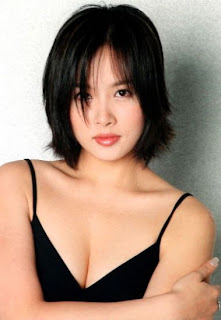 Every woman who has watched Kim Sun-ah in My Lovely Sam-soon loves the actress.

Many have said that they relate to the character and admire the star for her dedication to her work. That’s because Kim actually piled on the kilos to portray the titular character in the 2005 drama series.

Sam-soon is basically the Korean version of Bridget Jones. They share similar traits: both are on the chubby side and singletons looking for love. And of course, the object of affection (even if the heroine is in denial initially) is a man oozing charisma. In this drama, Jin-heon (played by Hyun Bin) gets the coveted Mark Darcy-ish character.

As things turned out, Sam-soon was the pivotal character that shot 32-year-old Kim to Hallyu stardom.

Having said that, I notice that there’s very little English material on the actress. All I could find out was that she was a model (endorsing Han Bul cosmetics in 1996) before becoming an actress. She made her silver screen debut in the actioner Yesterday (2002).

Dubbed the queen of comedy, Kim is also said to be passionate about acting and is careful and meticulous. She seems to be lying low lately. Apart from a couple of fashion spreads, her latest outing is a brief cameo in the movie The Worst Man of My Life.