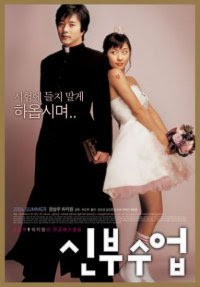 Oh, say it isn’t so! Kwon Sang-woo as a Catholic priest? That’s sacrilegious. I object!

Luckily, it’s just a rom-com where the soon-to-be ordained Brother Kyu-sik (Kwon Sang-woo, 권상우) has to choose between the love of a woman or an exclusive dedication to God.

Mr. Kwon is one fine and versatile actor. I’ve seen him play a debonair, love sick pup (Stairway to Heaven) and a gritty detective (Running Wild) and now, he’s a riot as a priest-in-training who has a tough decision to make.

He has ultra cute moments here as the bumbling man of the cloth who is given the task of encouraging the spirited Bong-hee (Ha Ji-won, 하지원) to go for baptism. Things become tricky (and funny) because Brother Kyu-sik is attracted to the girl!

Kudos also to supporting actor Kim In-kwon (김인권), who plays the mischievous Brother Seon-dal, as he provides much of the slapstick comedy as Brother Kyu-sik’s side-kick.

An enjoyable watch, right up to Brother Kyu-sik’s final decision, which will indeed make all hot-blooded women go “Deo gratias”.

Brother Kyu-sik and Brother Seon-dal will soon be ordained as Catholic priests but a mishap at mass one day gets the two expelled and sent to a remote village to help the local church out.

Enter Bong-hee, the local priest’s niece who returns from the States to get hitched to her boyfriend. However, she gets her heart broken instead. 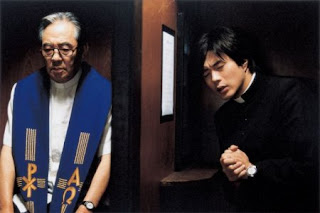 Confession: ‘Bless me father for I have sinned. I lied to Liz
and told her I wasn’t truly, madly & deeply in love with her.’ ;-P

Bong-hee is broke and needs to earn enough money to leave the village. Thus, she takes it upon herself to do odd jobs around the church.

As fate would have it, Brother Kyu-sik’s life takes an unexpected 180 degree turn when the priest suggests that in order for him to get ordained, he should guide Bong-hee through the steps of baptism!