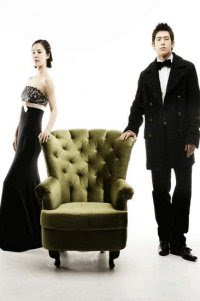 The drama just started and I managed to catch the second episode on Thursday (Sept 6).

The series has an interesting premise as it banks on the popularity of reality shows. The protagonist, a delivery boy named Kim Young-hoon (Ko Soo, 고수), is recruited for a reality show where he has to pretend to be a millionaire.

Wah, why doesn’t anyone approach me for such a thing? In the 2nd episode, we see Young-hoon being impulsively recruited for the show when he walks into a heated meeting room to deliver food to the producers of the show.

A food delivery boy is recruited for a reality program where he has to pretend to be a millionaire to a group of selected women. Very much like The Bachelor, Young-hoon will have to choose one of the girls to be his girlfriend, and she will be rewarded handsomely.

The young man thinks that he would be in control of the program but things become tricky when he discovers that one of the lady participants is Han Eun-young (Kim Hyun-joo, 김현주), his first love.

Oh man, that just spells doom for the rest of the participants, doesn’t it?