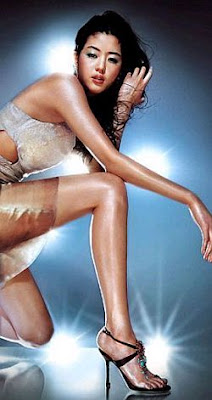 Did you know that Jun Ji-hyun (or Jeon Ji-hyeon) chose the name Gianna for her Hollywood debut flick? Just go to the Blood: The Last Vampire at IMDb.com. You’ll notice that she’s credited as Gianna Jun.

In the movie, Ji-hyun – pardon me – Gianna plays the protagonist named Saya, who hunts vampiric demons using a katana. The film is based on the Japanese anime movie of the same name.

Now that filming for the Hollywood production has wrapped, it is announced that the My Sassy Girl actress has inked a deal to star in a Korean production. Chung Yun-chul is set to helm He Once Was a Superman (HOWaS), which co-stars Hwang Jung-min.

HOWaS is about an eccentric who believes that he is a superhero – hmph, he sure sounds like a prime candidate for Who Wants to be a Superhero? The winner in the competitive reality series will be immortalised as a new comic book superhero developed with the iconic Stan Lee and even get the chance to appear in an original SCI FI Channel movie!

But I digress. Ji-hyun is set to play Song Su-jung in HOWaS. Su-jung is a documentary producer who goes to great lengths, even manipulation, to gather information for her program on the superhero wannabe. The movie is scheduled for an early 2008 release in Korea.