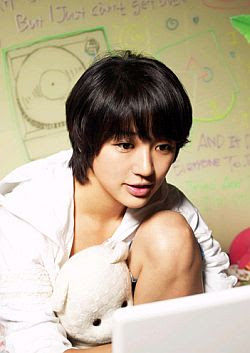 From replacement singer to in-demand actress. Yoon Eun-hye couldn’t possibly see the broad appeal of Princess Hours coming when she signed on to replace Lee Gai as a Baby V.O.X. member back in 1999.

(Lee Gai was booted out of the girl group when it was discovered that she lied to the management company about her age. It’s a crime to age in Korea…oh, where art thou, Fountain of Youth?)

Eun-hye debuted with Baby V.O.X at the age of 15 and was with the quartet/quintet/trio – depending on which year – until 2005. By that time, the group already had 4 albums under its belt.

Being part of the group was not without incident. An anti-Eun-hye psycho attacked the girl with a water gun by pretending to be a fan. He acted as if he wanted to give her a Pikachu soft toy as a present but when he got close enough, he pulled out his water gun and squirted a nasty combination of soy sauce and vinegar into the unsuspecting Eun-hye’s eye. Her cornea was damaged because of that!

Sheesh, I hope the psycho overdoses on his soya sauce and vinegar cocktail one day.

Once Eun-hye left Baby V.O.X. she tried acting, making the transition in a small role on the Nonstop 4 sitcom. She appeared opposite MC Mong before moving on to become a regular guest on variety show X-Man.

During X-Man, rumours about a romantic relationship with Kpop singer Kim Joong-kook surfaced. The tongues continued to wag when she appeared in the singer’s Saying You Love Me music video, released in July 2006.

The 23-year-old’s first leading role was in popular Korean series Princess Hours (Goong). It was so popular that 4 additional episodes were added to the initial 20-episode drama. And of course, she secured her stardom with the very addictive (we hear) Coffee Prince, where she plays an androgynous tomboy hired by the coffee shop owner who thinks that she is a he. Hmm, wouldn’t toilet breaks be a giveaway?

It is also reported that Eun-hye is currently in a legal tussle with her management company Eight Peaks. The actress is unhappy with the representation and wants out of the contract with the company.