Foreign buyers are finding a food-themed flick too good to resist.

The period drama entitled Sikgaek (식객) a.k.a. Freeloader prominently showcases Korean food and garnered a lot of interest when it premiered at the Pusan International Film Festival last week. It is reported that investors from China, Japan, Malaysia (yes!) and Singapore showed interest in purchasing the movie. 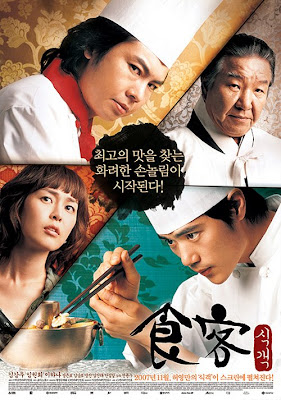 Liz doesn’t know much about food – that’s
Rooster’s turf – BUT the dude on the bottom
right is quite a dish ;-P

The film is based on the manhwa of the same title created by cartoonist Heo Young-man. The story is about two Joseon period chefs who are vying for the coveted title of the Dynasty’s last court chef.

An array of colourful court dishes appear in the film, which has been compared to the hit historical drama Jewel in the Palace.

Sikgaek is scheduled for a Nov 1 release in Korea.