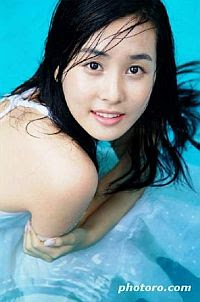 The My Girl actress has a MySpace site but she hasn’t visited it since March 2006 at the time of writing.

At the site, the adorable 23-year-old says that she was born in South Korea but went to high school in Sydney, Australia. She goes on to reveal that she speaks English pretty well :-).

She reportedly debuted in 2001 and has popular dramas Green Rose and My Girl under her belt. Her latest drama is Hello! Miss.