You could be kissing your handphone battery charger goodbye by 2010 because Samsung Electro-Mechanics announced on Oct 11 that it has developed a micro-fuel cell and hydrogen generator that runs on water!

The new technology was unveiled at the 2007 Korea Electronics Show at Ilsan, Gyeonggi Province. 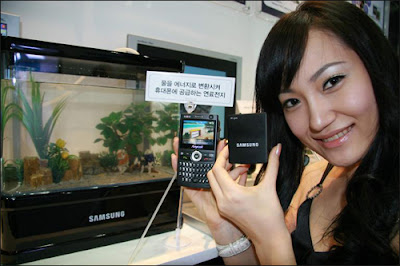 Water power is the way to go

“When the handset is turned on, metal and water in the phone react to produce hydrogen gas,” explained Oh Yong-soo, vice president of Samsung Electro-Mechanics’ research center. “The gas is then supplied to the fuel cell where it reacts with oxygen in the air to generate power.”

Uh-huh, yeah. Supercalifragilisticexpialidocious, to you too. Sir.

The new fuel cell reportedly powers a handphone for 10 hours, twice as long as rechargeable batteries!

Oh said water-powered handphones are expected to hit the market by 2010. “Later handsets will be developed that don’t need the hydrogen cartridges to be changed, and would only need to be filled with water,” Oh added.

Cool bananas! Imagine how easy travelling would be with an H2O-powered handphone. Phone dying? Just make a trip to the bathroom for a “recharge”.