Wake up and smell the dung. That’s what you would do if you lived in Shit City. This sounds like the beginning of a high school joke but a metropolis made up of human excrement really does exist in the world of animation and it’s where Aachi & Ssipak call home.

Aachi & Ssipak having a Beavis and Butthead moment.

This is absurd! Here is the synopsis:

‘AACHI & SSIPAK (title taken from the Korean word for “bum” and a Korean profanity) which tells the tale of a future world where feces is the sole source of energy and the government has implanted ID chips in the anuses of its citizens that rewards them with an addictive, hallucinogenic laxative called a “juicy bar” every time they have a “sincere” bowel movement.’


Say what?! Whoa, I thought only the Japanese were weird. I… so want to watch this movie! It’s like one of those disgusting things where it’s so gross you just have to keep staring. Yea? No? I’m alone with this one? 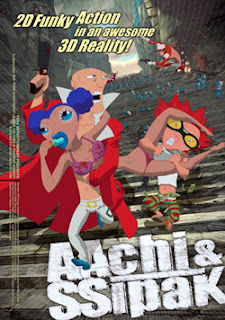 Wow, congratulations. But really, just about how many pot brownies did the guys at Jteam Studios consume to realize this wacky sci-fi adventure?

Who is the Rain wannabe?

6 thoughts on “The world is going to sh*t”