Big Bang debuted last year (2006) and their gruelling pre-debut training was chronicled for all to see in the Big Bang reality documentary, which was aired on the MTV channel.

The band’s journey to stardom started off with six boys busting their asses for a spot in the group. The teens underwent intense vocal and dance training – the kind that would make any individual with lesser determination cower.

As weeks went by, the young men proved that they have much passion and drive to reach their dreams, so very commendable in ones so young.

Not all of them made the cut. Initially, two were dropped – SO-1 and Seung-ri – making Big Bang a quartet. However, head honcho of YG Entertainment Yang Hyun-suk decided to give the pair a second chance. The youngest of the lot Seung-ri eventually proved that he was right for the group. And so, Big Bang debuted as a quintet at the YG Family concert on Aug 19, 2006.

The band released its first full-length album in Jan 2007. While tracks from the album, and a few single albums prior to it, were practically unheard of here in Malaysia, the group hit music gold with the release of a mini-album in Aug 2007.

The song Lie (거짓말) – a get-up-and-dance track with a seriously infectious hook – is currently at the top of music charts and has been receiving loads of airplay…and yes, Malaysians are hearing it loud and clear too. (Watch the Lie MV!)

Meet the boys of Big Bang:

T.O.P
At 20, T.O.P is the eldest in the group. You can easily tell him apart from the rest because he usually has his shades on. He is a rapper and a talented beat-boxer…and actor!
Former stage name: Tempo
Real name: Choi Seung-hyun (최승현)
Date of birth: November 4, 1987
Education: Seoul Art College (Majoring in Musical)
Position: Rapper/ Beat boxer

Tae Yang (태양)
The shy and sensitive one of the group had his first kiss in the My Girl MV. He has been with YG since he was 12. While he started out as a rapper, he is currently Big Bang’s vocalist. The now 19-year-old is working on a solo album and will be the first from the group to release a solo album.
Former stage name: Young Bae Taekwon
Real name: Dong Young-bae (동영배)
Date of birth: May 18, 1988
Position: Vocalist

Seung Ri (승리)
The youngest of the lot is a talented dancer and choreographer. The 17-year-old was on Battle Shinhwa, a program that was searching for the 2nd Shinhwa, a successful Korean band. He was rejected in the show because his vocals failed to impress but recruited by YG’s head honcho as a trainee.
Former stage name: V (for Victory)
Real name: Lee Seung-hyun (이승현)
Date of birth: Dec 12, 1990
Position: Vocalist

Finally, the one who got the boot: 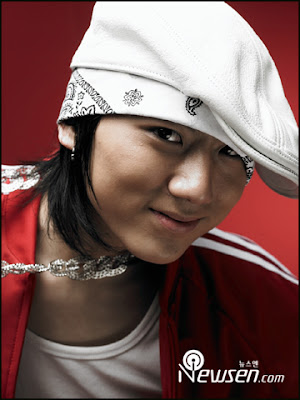 Jang Hyun-seung (장현승) or SO-1, did not pass the audition to become a member due to his shyness on stage. But, there are many fansites dedicated to the lad, cheering him on to follow his dream.