Reading this article reminds me of my Korean childhood friend. I’d be chatting with her on the phone when suddenly her brother would start yelling in the background. She’d yell something back, there would be a muffled quibble over the phone then the line would go dead. 15 minutes later, my friend would call back to apologize – her brother had yanked the line off the phone jack and they were having a slug fest. This happened often.

Which makes me wonder… are most Korean siblings vindictive by nature? Ha ha, of course I mean no disrespect, but this interview with Kim Tae-hee about her new movie Venus and Mars (working title) sounds all too coincidental.

Kim Tae-hee sheds her demure visage for her role in Venus and Mars, a romantic comedy about what happens when love turns into a sour mess right after marriage. Kim plays a malicious female who is hell-bent on making her husband’s life just plain horrible. But Kim isn’t the only one going to the opposite extreme. Sul Kyoung-gu has traded his tough and rugged on-screen image to play Kim’s battered husband. 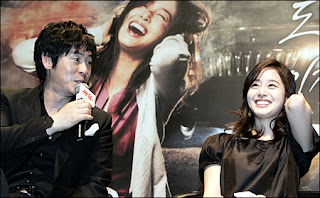 Smiling won’t get you out of this one, Tae-hee!
We now know what you really are!

Apparently, playing abusive husband beater is a piece of cake for Kim. “When she was young she used to beat the hell out of her younger brother and scare the life out of him… The beating scenes were real – she said she couldn’t fake them and really kicked me!” exclaimed her co-star Sul.

To everyone’s surprise, Kim sweetly confessed, “My brother calls me ‘iron foot’ because I used to kick him a lot… Once I broke a window trying to get him when he escaped to the veranda.”

“I didn’t really believe it until we went into shooting,” added Han Ji-seung, the movie’s director. “She did that thing where you don’t simply stop with kicking someone, but rub the spot with the foot afterwards – now that’s someone who’s done some kicking before, because you’re rubbing in the pain.” 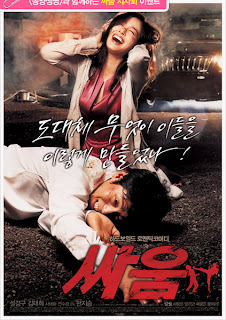 Venus and Mars, which is slated for release in Korea on December 13th, is based on a true story and the director draws inspiration from Hollywood’s War of the Roses and Mr. & Mrs. Smith. Han explains, “Rather than focusing on romance, it’s a story that defines love through fighting.”