We were waiting for the official photog’s pics to post this long-awaited entry, but can’t wait anymore. Not when we’ve already seen photos of the TVXQ boys at the Anycall Anyband Concert (on Nov 27) AND pics of the band at the Gimpo Airport, Seoul as they were leaving for Japan yesterday! It’s the Internet age, after all. 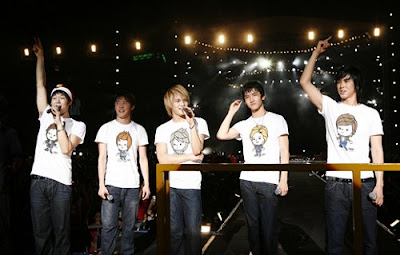 TVXQ in Kuala Lumpur on Nov 24!

And so, here’s a special shout out to all Cassiopeians at the TVXQ Official Thread at Soompi forums. Loads more pictures at the thread, so if you want to see more of the band in action while in Malaysia, as well as fan accounts of the concert, you know where to go.

K-popped! was also at the TVXQ concert on Nov 24. The Korean boyband staged O – The 2nd Asia Tour Concert at Stadium Merdeka, an outdoor venue located right in the heart of Kuala Lumpur.

Last July, the popular quintet reportedly raised the roof at Bukit Jalil’s Putra Indoor Stadium, but we weren’t there to witness the event since we weren’t K-popped! yet.

Now that we’ve been K-popped!, we made a beeline to watch the Gods Rising from the East in action, and here’s the lowdown on the concert. 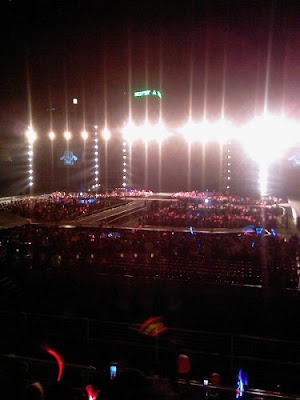 A sea of support from the Cassiopeians

Electric in the air
When two white MPVs (ferrying the boys) sped into the stadium at 7.15pm, the crowd went wild. The electric energy noticeably kicked up a notch and the anticipation and enthusiasm only increased after that. 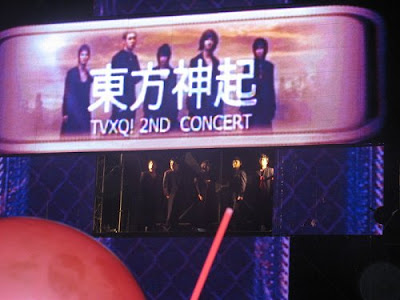 TVXQ’s back in town to rock us!

The five boys burst onto the stage at 8.15pm sharp and launched into their very energetic routines. The fans went berserk.

Go Xi-ah, go Xi-ah!
The TVXQ boys were charming but Xiah was clearly the one with charisma and stage presence. Now I know why Samsung chose him for Anyband, he’s a good choice as he really stands out. 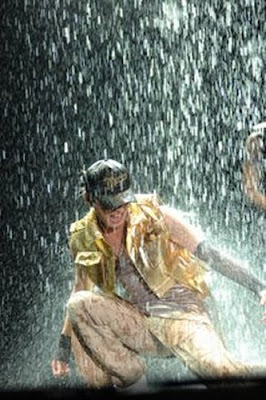 Xiah got wet ala Rain, got up, danced and promptly
slipped and fell twice. He recovered very quickly but here’s a
word of advice: ‘Don’t move around so much after getting soaked, Xiah.’
– Pic credit: Michael Sin of Babyboss Pictures

Xiah’s solo sequence rocked the stadium, but when it came to the part when he got rained on, the artificial shower onstage reminded me of Rain’s signature moment during his concert earlier this year.

The two persons sitting on either side of me immediately turned around and almost simultaneously voiced out my exact thoughts. Yes, yes, friends, I know…that’s so Rain. 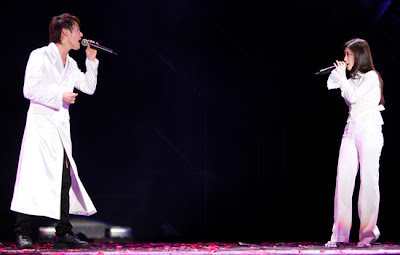 And how about Xiah’s lovely duet with guest artiste of the night Jang Ra-in, huh? 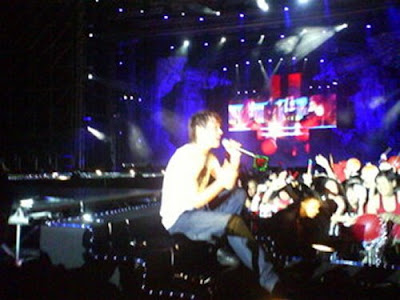 Xiah takes a breather towards the end of the concert after dancing
like there’s no tomorrow throughout most of the show.

Apart from that, the dance choreography was pretty repetitive, but Xiah saved the day as he turned out to be one mean dancing machine. Somebody, stop that man before he hurts himself! 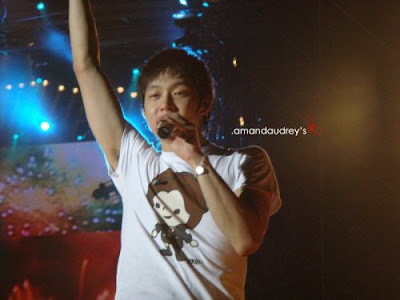 ‘Yeah, I’m the one in the group who can communicate with fans
in English. Lemme hear you scream!’

The adorable and playful Micky sang Brian McKnight’s One Last Cry for his solo performance and it was a commendable effort. He was also the member tasked with speaking to the crowd in English and his efforts to do so were much appreciated. 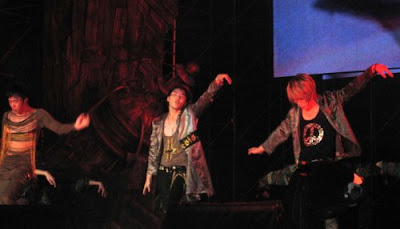 The 21-year-old had a clever way to circumvent the “no shirtless” rule when performing on a Malaysian platform. He wore a gold shredded top, which we dubbed the “nipple peeper” shirt as it showed off his chest when Micky got into the energetic dance moves. 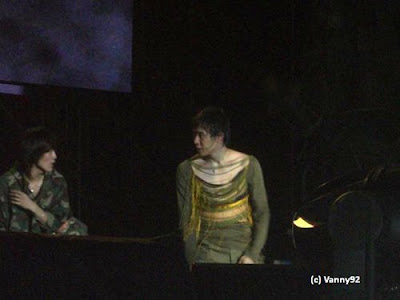 He drove many fan girls wild that night

The fan girls screamed in sheer delight when a close up of Micky in the ensemble was projected onto the screens. 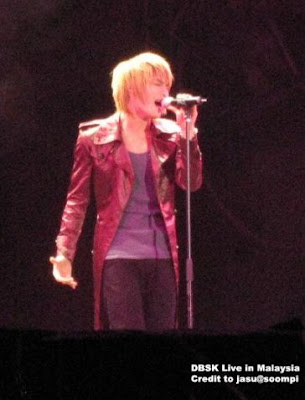 ‘I even sing pretty too’

Hero’s such a pretty boy and he knows how to work the crowd and get the fan girls screaming. 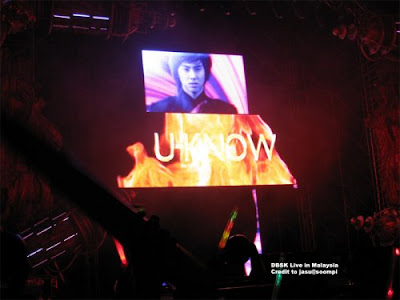 Leader of the group, U-Know kept dancing to a minimum that night

Despite not being completely healed from the back injury he sustained during practice in October, U-Know did as much as he could during the show. 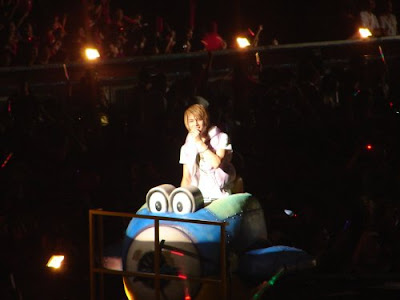 The cute props, especially the mini airplanes the boys “piloted” around onstage during the song Balloons. 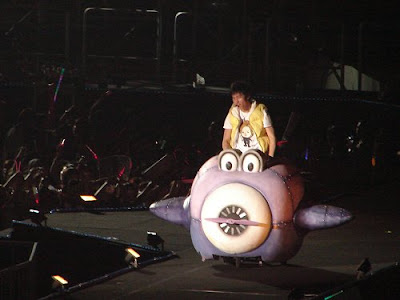 Max pilots his plane around and gets stuck at one point 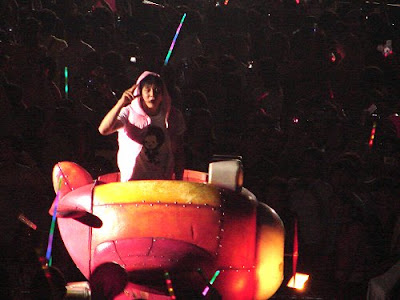 They were evidently having so much fun onstage, you just wished you had one to pilot around as well. 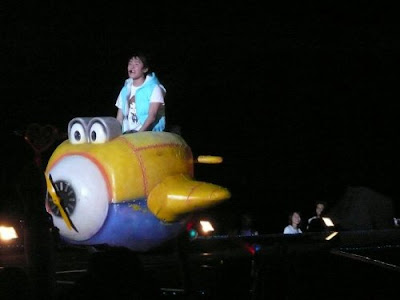 Xiah “speeds” around on stage 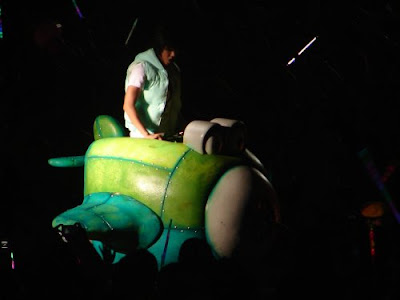 U-Know forgets where the breaks on that thing is

Ingenious “swimming”
TVXQ’s “swimming in an aquarium” highlight may just be a publicity gimmick, but the illusion was pretty ingenious. It consisted of a huge white sheet covering the height and width of the stage that functioned as a screen, an underwater image projected on it and wirework.

Now you see him, now you don’t 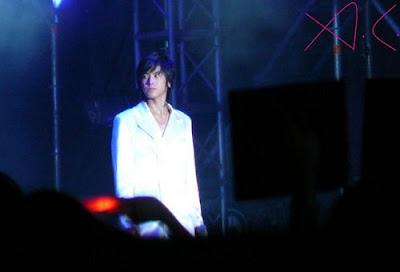 U-Know disappears from stage a whole lot due to his back injury.
Get well soon!

U-know kept vigorous dance moves to a minimum because of his back injury. Thus, he sat out on most of the fast numbers. The other four members gave their all, but it still felt incomplete.

Max who?
The youngest of the group Max needs more personality as he easily got lost in the quintet. The 19-year-old’s solo moment was unimpressive, boring even. 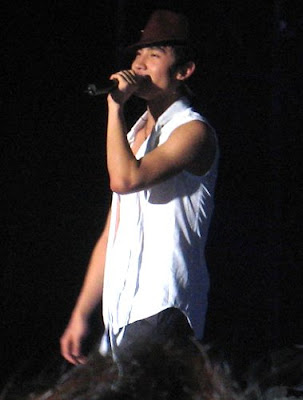 Max fails to leave an impression during the concert

He sang in English – improvement on diction is needed as I didn’t understand most of what he sang. Only after reading the fan forums, did I discover that the jazzy, bluesy number he performed was Extreme’s When I First Kissed You.

Communication is essential
The boys lack communication with the crowd. I’ve watched their Five in the Black Concert in Budokan, Japan and they had no problems with building a rapport with the audience since they spoke Japanese. 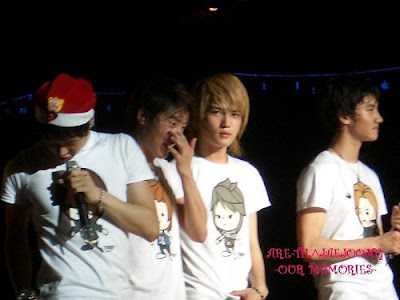 You can give us killer looks all you want Hero, but nothing
beats communicating with us with speech

However, during the KL show, they only addressed the crowd after the 5th song. How did they do it? They spoke Korean and subtitles would appear on the two screens mounted on either side of the stage. There was minimal interaction with the crowd after that.

They didn’t prepare any rehearsed sweet talk like Rain. Now I appreciate the Energizer Bunny’s efforts in communicating with the fans, even if it was scripted and spoken in halting English. It’s so important to make the crowd feel a part of the show. 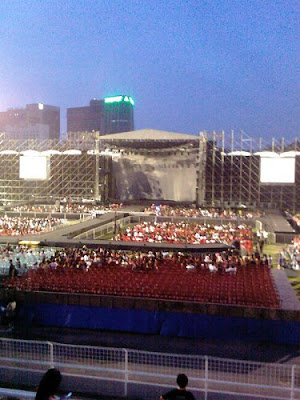 Outside looking in? “Siberia” seats are so far away
from all the action 🙁

Sound was bad from where we sat – Orchid dubs it “Siberia” and I felt so removed from all the action.

Maybe it was an outdoor venue, maybe we were too far away, but sound was either muffled or too loud most of the time. I had a hard time listening to what the boys were singing. Not that I’d understand, but clear sound is still important no matter what language one sings in.

No live band accompanied the quintet

Showy
The concert felt too showy as it relied a lot on fireworks, props and visual effects to spice things up. 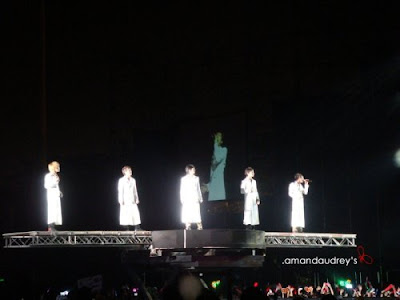 The TVXQ boys balancing on the elevated, revolving stage

There were also too many video fillers in between the songs. These trimmings were supposed to complement the show and not overshadow what the group had to offer the audience – their music and showmanship!

Song selection
And strictly on a personal point of view, I didn’t enjoy the selection of songs as most of the fast numbers leaned towards the “heavy metal” side. 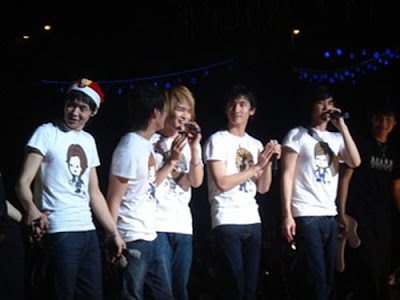 The boys having a good time up on stage

Give me more of that get-up and dance pop and less of the angst-ridden, mean guitar-riffed rock. Give us tracks such as High Time, Choosey Lover or Zion (this is one sensual number and I know you guys rock it!). Guess I was at the wrong TVXQ concert, huh? Those songs are sung at the Five in the Black Concert ;-).

Harmony
We want more acapella, guys! The quintet harmonises beautifully but what a shame we didn’t get to listen to more of the group’s harmonies live!

Venue sucked
Stadium Merdeka wasn’t a good concert venue because it lacked proper facilities (read on to find out what they were). Bukit Jalil proved to be a better venue to hold a concert.

Parking sucked
The very limited parking lots could never, ever accommodate a large concert crowd like the one on Nov 24 (the local paper reports it at 12,000).

Cars were driven up onto sidewalks to be parked and your “friendly car park attendant” demanded RM10 for letting you park illegally on the public walkway. You pay or else you’d worry something bad might happen to your car.

Toilet facility sucked
Sixteen portable toilets (8 on either side of the field) for a crowd of 12,000? Are you freakin’ kiddin’ me?! And the most hilarious part was, we who were seated in Siberia didn’t see any visible access to the toilets on the field below. 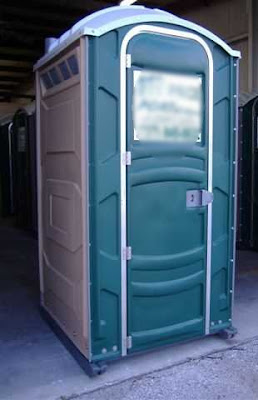 We did what any sane human being would do in a desperate situation like this, held in our pee. Never in my life have I been so happy at the sight of a toilet bowl (when I finally reached home). 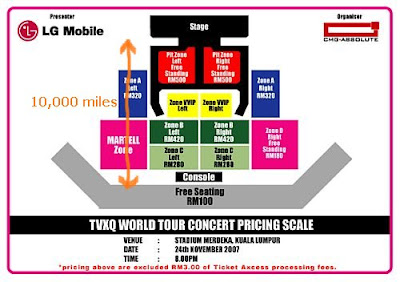 We got the most affordable tickets (RM103) and were seated at the tiers of the stadium directly opposite the huge stage. I felt isolated from the rest of the crowd and sound was a bummer.

Screens sucked
The so-called “big screens” on both sides of the stage were not large enough. We need bigger screens to see from all the way in Siberia!

[Contest] K-popped! gives away passes to meet the Wonder Girls in Malaysia

Brown Eyed Girls at Seoul’d Out 2009 in Singapore