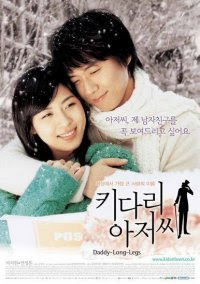 Wow, I’m impressed. How did they go make a stalker movie so romantic? The flick could go the way of a chiller – crazy stalker person from college years continues to stalk at the workplace – but surprisingly, it turned out to be a rather sweet love story.

Young-mi (Ha Ji-won,하지원) is an orphan who has always had her needs met by a mysterious benefactor, whom she nicknames Daddy Long Legs.

While living in a rent-free home, she discovers an e-mail written by the previous tenant detailing her sad, unrequited love story.

Since Young-mi works as a script writer at the radio station, she decides to air the heartrending story in hopes of finding the lady her one true love. 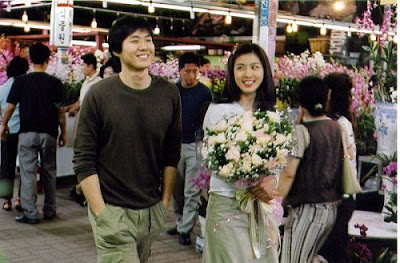 Flowers for the lady: Oh please say it comes with the man
as well ;-). Young-mi and Jun-ho take a stroll through the flower market

As things turn out, Young-mi discovers clues that lead her to suspect Jun-ho to be the man in the lady’s love story.

However, there’s a pleasant twist to the plot as everything comes to a head when the identity of Daddy Long Legs is revealed, an illness is made known (hey, it’s a Korean flick, after all) and a little role reversal is thrown into the mix.

Suffice to say that the red herring the filmmakers throw at you works really well here. You’ll be taken for a ride, alright, but you don’t feel cheated at the end of it. Also, the flick could get a little soppy, but never manipulative.

I personally think it’s because of Yeon Jung-hoon, he played his part so well, you can’t help but love the character. I think I just gave away the plot, didn’t I? I’ll stop writing now. 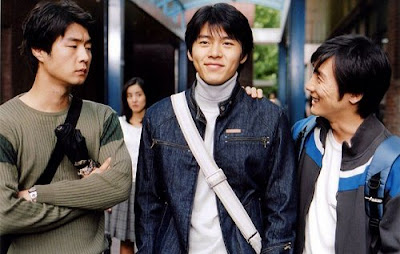 My, what lovely dimples you have: Hyunbin flashes his
God-given assets to the boys

Oh no, wait. I can’t stop writing without saying that Hyunbin (My Lovely Sam-soon star) has a supporting role in the flick. He appears in the flashback scenes. Apparently, the only thing Orchid took away from the flick is Hyunbin and his dimples. Sigh…so disappointed ;-).

Loosely-inspired by Jean Webster’s 1912 novel of the same name. What is the novel about? Well, it follows the protagonist, a young girl named Jerusha “Judy” Abbott through her college years. She writes letters to her mysterious benefactor, a rich man whom she has never met.

You’ll have to get the DVD but I watched it on: