Love Truly stars Eugene/ Kim Yoo-jin and Lee Min-ki have teamed up again for a new flick entitled Feels So Good. The cast and crew of the rom-com are currently in the Philippines to shoot the film! 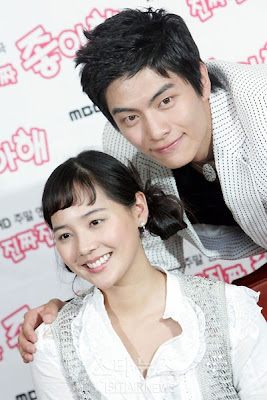 Lee Min-ki (right) and Eugene are filming their
new movie at Boracay Island, the Philippines!

The actors met with the press in Manila last week. The flick is about 6 strangers who fly to the Philippines hoping to escape their troubles, unaware of what love has in store for them once they land on Boracay Island.

Twenty seven-year-old Eugene, who was “the face” of the Philippines tourism in Korea back in 2006, visited the country twice that year. At the recent press conference she told the press that she was excited to be back in the country.

Newspaper clipping showing the pair at the press
conference in Manila

Meanwhile, her 23-year-old co-star Lee Min-ki is visiting the Philippines for the first time. He said that he has heard of the beautiful beaches in Boracay but did not know it was in the Philippines until he arrived at the country last week.

Shooting of Feels So Good is set to wrap up on Feb 23.

Yo Filipino readers (if we do have any), tell us if you bump into any of the stars, OK? 😉

Oh Ji-ho is a Daddy

15 thoughts on “Eugene and Lee Min-ki in the Philippines”