While Rooster continues to play Sleeping Beauty, Orchid and Liz attend another enjoyable Korean language class. They share with you their adventures and misadventures with the language in MYK4!

We had two teachers in class that day. One was the original 선생님 (if you don’t know what this means, you’d have to backtrack to the first article of the series) and another was a 선생님-in-training who was there to observe the session. Omo, two Teachers in one class? Give us a break already ;-). (Yesss, I’m sure I used “Omo” correctly here, pats self on the back). 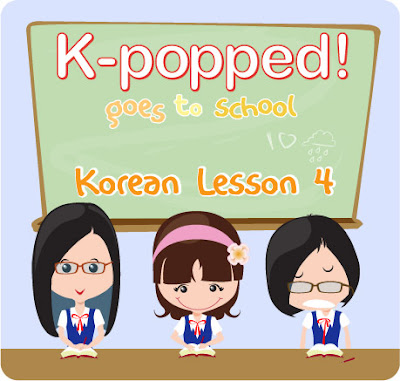 Teacher (the original one) started off the class with the five final consonants of ㅋ, ㅍ, ㅌ, ㅊ and ㅎ and the pronunciation when the alphabets appear at the end of a word.

Teacher: You pronounce the word like the original consonant it is “birthed” from.

For instance, 엌. Just remember that ㅋ (kh) is derived from ㄱ (g/k), thus you pronounce the word as if it was written 억 (eok).

While practising with our notes, we came across the word for “ray of light”, which was 빛. I chuckled a little because without learning the rule, I would have gone “bich”, which sounds so similar to the English word for she-dog. However, now I know that it’s pronounced “bit” a more similar sound to a quick “bid”.

Teacher: It is “bit”. Don’t pronounce it like in English, don’t go “bit-th”. You must say it as one syllable only. Cut yourself off and say “bit”.

Wrapping up our study on Hangeul was the two final consonants of ㄲ, ㅆ and a few more combinations which we will meet as we progress with the language.

The above pronunciation rule applies here as well: ㄲ = ㅋ = ㄱ and ㅆ = ㅅ. Everything was fine and dandy until we came across the word for chicken = 닭 and price = 값.

Teacher: For cases like this, sometimes we pronounce the word using the 1st (bottom) consonant, sometimes the 2nd. There is no set rule to it; it’s on a case by case basis.
For chicken 닭 (dalk), we say “dak” and not “dal” choosing to use the 2nd consonant. But for the word price 값 (gabs), we go “gab” and not “gas”, choosing the 1st consonant.
Fellow student: Huh? Like that how do I know which is used?
Teacher: 나중에, later, we learn this. In Beginner 2 class, we learn more of this. But in Beginner 1 class, we just learn the Hangeul first. And with that, we have learned all the consonants and vowels of the Korean language. 박수! (bak-soo = clap hands)

We learnt the names of some countries in Korean, some sound like English while others sound like Mandarin.

Korean seems to be a pretty straightforward language. Like say, you want to tell someone you’re Malaysian or American or Korean, you’re just saying “Malaysia person”, “America person” and yeah, “Korea person”.

So when Teacher asked us this question: 어느 나라 사람이에요? (eoneu nara saramieyo?) Literal translation: Which country person?, basically the question: Where are you from?

We finally arrive at learning how to introduce ourselves. Thank you, Grace, for the headstart of (name)입니다. However, Teacher went with the 이에요/ 예요 instead.

The text we have to learn included introducing our name, nationality, hometown and occupation.

It went (some information has been omitted to protect the innocent, tee hee):

Teacher said that in the next class, she will ask every one of us to introduce ourselves in Korean.