Producer/singer Park Jin-young and his army of talents are set to entertain the masses Stateside with the launch of The JYP Tour. 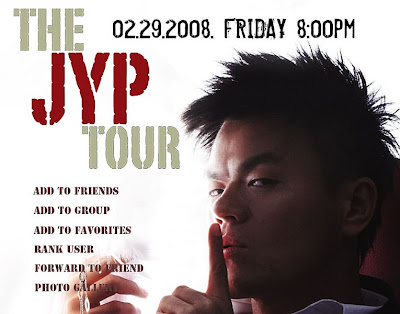 The 36-year-old, who made his stage comeback last year, will be toplining the concerts with appearances by his protégés: girl group Wonder Girls, J-Lim, Min and G-Soul.

The tour, which is a continuation of JYP’s Bad Party concerts in Korea, kicks off at the WaMu Theater, New York Madison Square Garden on Feb 29.

JYP and his entourage will then roll into the Los Angeles Wiltern Theater on March 8. The gang will also be making stops in Atlanta and San Francisco.

Although the current tour is headlined by JYP, the talented man plans to turn it into an Asian music festival featuring top artists in the future.

Tickets to The JYP Tour can be purchased at www.ticketmaster.com.

In other semi-related news, you could find yourself sharing the stage with JYP, if you’ve got what it takes to be one of his protégés! 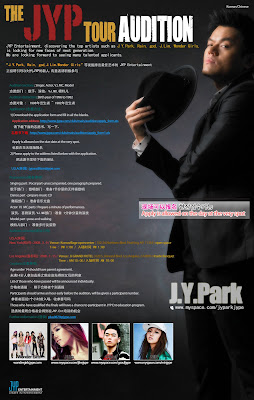 JYPE audition call. Hit the picture to enlarge it.

JYP Entertainment is holding auditions in New York and Los Angeles, so here’s your chance to be mentored by the man.

Further details at: www.jype.com/audition.town (the site is pretty unstable)