After a successful concert tour in their native South Korea, FT Island has now descended upon Malaysia to give us a taste of their music in the FT Island 1st Live in Malaysia concert.

The concert will be held tomorrow (March 30) at the Sunway Lagoon Amphitheatre. 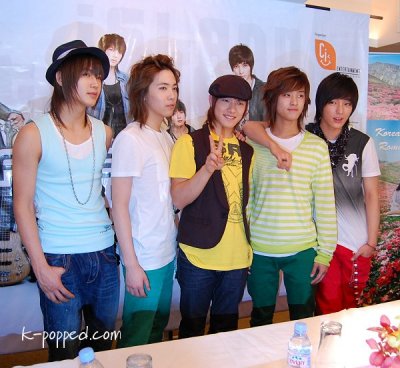 The boys debuted in June 2007, but have already scooped up numerous New Artist awardsback home. They won at the 2007 Asia Song Festival, 2007 Mnet Music Festival and the 2007 Golden Disk Award. 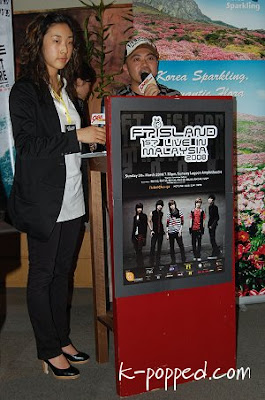 MC & translator: They didn’t introduce themselves formally.
On the right is MC of the event, 98.8FM radio DJ Simon (I think)
who asked all the questions and the lady is the English translator. It was a nightmare
transcribing the recording of the event as the translator did not E-NUN-CI-ATE
her words. She spoke really fast and slurred her speech, and the horrible sound
system didn’t help either.

While the conditions surrounding the PC with FT Island in Malaysia on March 28 was a nightmare, the boys still mustered up enough chutzpah in the suffocating heat to answer all the questions thrown at them.

Here’s the lowdown from the Q&A session:

Hong-gi: The weather here is nice, and the people are warm and friendly. It’s also a very clean country and we are very happy to be here.

Won-bin: The weather is very nice, the people are very warm and yes, the country is very clean. If we get another chance, we would like to visit (Malaysia) again.

Min-hwan: It’s a very interesting place and there are many things to see.

Jong-hun: It’s my first visit here, but I’ve actually wanted to visitMalaysia before. We really appreciate being here and hope that the concert will be a success. 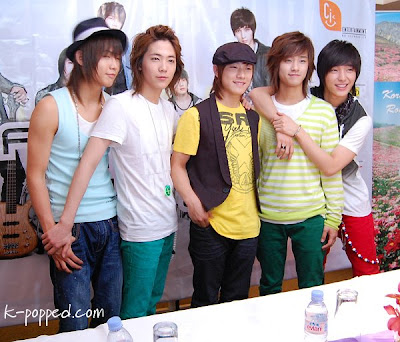 Friends: The boys are all close and chummy with each other.
From left: Won-bin (guitarist, vocalist), Hong-gi (lead vocalist),
Min-hwan (drummer), Jae-jin (bassist) and Jong-hun (guitarist, pianist).

What can we expect from the FT Island1st Live inMalaysia concert on Sunday (tomorrow)?

Hong-gi: First of all, I hope that the concert will bring us closer to the Malaysian fans. We will be using a little English and BahasaMalaysia during the show. Also, the repertoire will be slightly different from the Korean concerts…watch out for it.

What do you think about the support you get inMalaysia?

Hong-gi: We are very thankful to the media for supporting us and we are happy that many people recognise us. We really appreciate it. 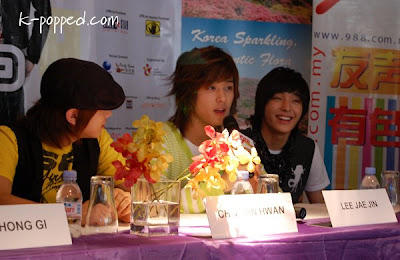 As the Hallyu spreads, you have become ambassadors ofSouth Korea. What would you recommend foreigners who would like to visit your country one day?

Won-bin: I would say Apgujeong, the fashion and shopping district inSeoul.

Hong-gi: I’d recommend the tokpoki (떡볶이, which is rice cakes seasoned with gochujang/ Korean chili paste) in Shindang-dong. It’s very famous and it’s probably one of the best inKorea.

Min-hwan: I suggest one of the best holiday spots inKorea – Gangwon-do, which has fresh air.

Jae-jin: I would like to recommendHongdae street where the younger generation usually hang out and enjoy themselves. 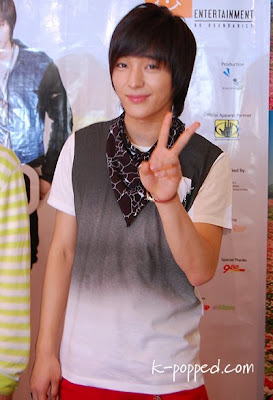 Malaysia is well-known for its wide variety of food. What have you tried?

Jong-hun: We’ve tried Nasi Lemak and Satay and we like it. I would like to try other Malaysian dishes, but not all of us can take spicy food.

What would your message to your Malaysian fans be?

Won-bin: Thank you to all of you who greeted us at the airport and we’ll try our best to return the love and warm welcome shown to us at the concert.

Hong-gi: Yes, well said (laughs). Also, thank you to everyone who bought our album. We hope that you’ll continue to love our music and we promise to always make better music. 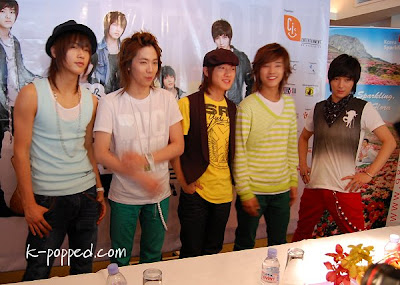 Cool pose: Look at Jong-hun (right)! Ha ha he’s so cute. He’s known to
be rather awkward and cheesy — and this pic proves it! The rest of
the boys — from left: Won-bin, Hong-gi, Min-hwan and Jae-jin — pretend not
to notice their bandmate’s pose

Won-bin: Thank you for being here, we’ll try our best to return in the future.

Hong-gi: We’re glad to get the chance to talk to so many people and please, come to the concert and enjoy it.

Min-hwan: Thank you for loving the song Until You Come Back. There are many more songs in the album (The Refreshment), and I hope you’ll love them as well.

Jae-jin: Thank you for the love throughout and we hope to see you again.

Jong-hun: We’ll give our best at the concert. 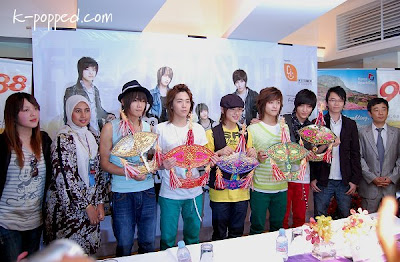 Wow, wau: FT Island boys with the sponsors. The boys are each holding a
mini wau (traditional Malaysian kite)

The boys will be holding a meet-the-fans and autograph session at Cineleisure Damansara, The Curve today (March 29) from 1pm onwards.

The concert will be held at the Sunway Lagoon Amphitheatre tomorrow. Ticket details are at the “More on the concert” links below.

For more photos of the press conference, go to K-popped! Group on Facebook Photo Album.

More on the PC:
F.T.Island in Malaysia