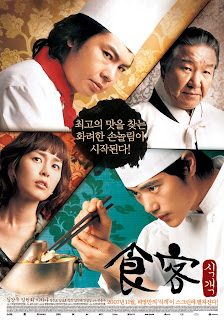 First off, the food shots were fantastic. I was famished by the time the credits started rolling (thank goodness for that packet of ramyeon in the pantry).

Adapted from a popular Manhwa by Heo Yeong-man, Shikgaek “is the first Korean film that deals deeply on the subject of cooking.” (Show East Website)

Kim Gang-woo plays Sung-Chan, a humble vegetable seller and every ahjumma’s dream son-in-law. Jin-su (Lee Ha-na), a vivacious young reporter, tries to convince the vegetable seller to participate in a cooking competition to win the coveted knife of the Royal Court Chef of Korea’s last King and prove his skill as the best chef in Korea. Sung-Chan is disinterested.

5 years before, Sung-Chan was a top apprentice at the prestigious Woonam-jung cooking school. But alas, something goes wrong during his final exam against jealous apprentice Bong-joo (Lee Won-hee). Sung-Chan’s golden blowfish sashimi is laced with poison and the judges are almost killed. Sung-Chan’s spirit is broken and leaves the world of the culinary arts to live in the peaceful countryside with his ailing grandfather. 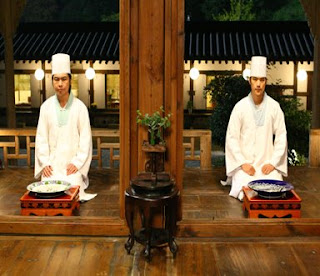 Apprentices of the Woonam-jung school.

Upon hearing about the competition, Bong-joo, now a restaurant tycoon and master of the Woonam-jung school, seeks Sung-Chan out and cuts him a deal to compete and win the knife for him. Sung-Chan refuses the offer and decides to go head-to-head in the competition against Bong-joo instead.

The film has a predictable story from the start but it was a really enjoyable 110 mins (and not just because it had food in it). We weren’t stuck in the kitchen throughout the entire movie, the comedy was great and the chemistry between characters was just right.

However two instances in the film that left me reeling were:

During the Japanese occupation in Korea, the Royal Court Chef cuts his own hand to show his loyalty to his King and his country. Touched by this act of devotion, a Japanese bureaucrat takes the knife home to Japan after the Chef’s death. 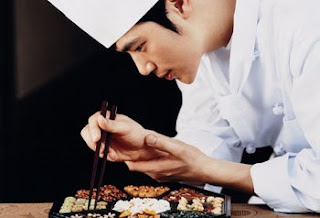 Now, the son of the Japanese bureaucrat comes to Korea to return the knife of the last Royal Court Chef of the Chosun Dynasty to the most deserving chef in Korea. A competition is held to determine the knife’s fate, and unknowingly, the fate of two men.

Who will be the best chef?

On DVD. I give it 3 spoons out of 5. I still can’t get over his sacrificial choice.