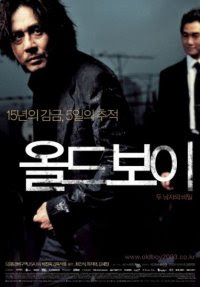 Now I know why my movie buff friends have been singing praises about this Park Chan-wook-directed flick. It’s good, and if you haven’t seen it, it does live up to all the hype surrounding it.

I was riveted while watching it and like the protagonist, wanted to know what on earth is going on!

In this thoroughly engaging flick, Oh Dae-su (Choi Min-sik, 최민식) relates the utterly bizarre experience he went through – abducted and imprisoned for 15 years and then upon his release, given 5 days to find the reason why.

The man simmering with vengeance meets Mido (Kang Hye-jeong, 강혜정), a young lady who works as a chef at a Japanese restaurant, and they are greatly attracted to one another. 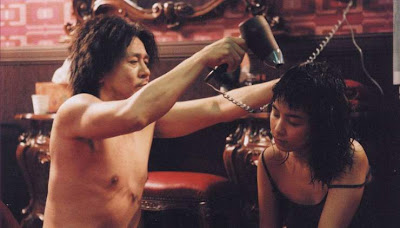 Hair dry: ‘You know, you gotta do it this way to get all the tangles out’

Things get more interesting when Dae-su comes face-to-face with the antagonist, Lee Woo-jin (Yu Ji-tae, 유지태), who continues to happily taunt Dae-su as he searches for the truth.

The truth? It’s revealed alright…in all its twisted unadulterated glory, and makes you realise the extent of Woo-jin’s Machiavellian machinations. 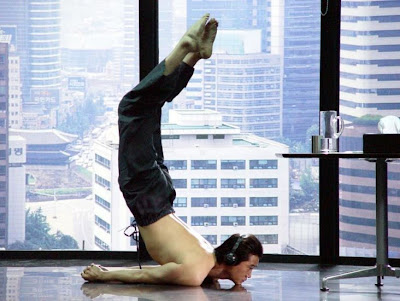 Gumby: Woo-jin (Yu Ji-tae) shows us how bendy he is.
Those yoga classes work wonders, huh?

I’ve seen Choi Min-sik in Springtime (2004), but totally zonked out mid-flick. However, the actor is excellent here as the tortured Dae-su. Apart from that, hunky Yu Ji-tae – who starred in 2006’s Running Wild (I zonked out on this too!) – makes the loco bad boy sexy.

Oh, the material here isn’t appropriate for the younger crowd. Just in case you didn’t know and plan to watch it with the entire family :-P.

Husband and father Oh Dae-su is abducted and placed in a private makeshift prison. His numerous attempts to commit suicide fails and Dae-su wonders who hates him so much to torture him this way. 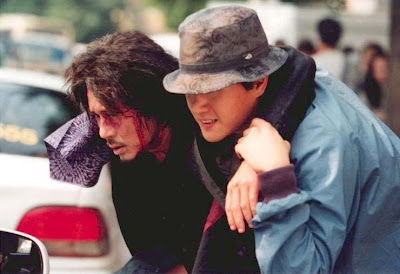 His only companion is a TV and when Dae-su receives news that his wife has been brutally murdered (and he is framed for it), he swears to take revenge on the man who has destroyed his life.

This one is for keeps.

Rooster got it for me in Beijing and brought it home when she was back for the Lunar New Year holidays. Yay!