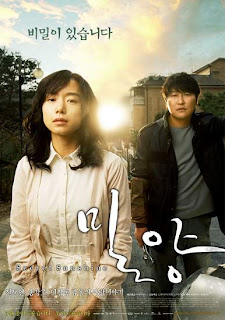 Lead actress Jeon Do-yeon, picked up awards like plucking berries from the bushes for her role here.

In this emotionally-charged flick, she portrays a widow named Shin-ae who suffers from a mental breakdown after her son is abducted…and murdered.

That’s one tragedy too many since the poor lady recently lost her husband, who apparently cheated on her when he was alive. I’m not too clear on the details since my copy of the flick had really terrible subtitles.

All I had to bank on while watching the award-winning movie were bad subtitles and my beginner level understanding of the Korean language.

Yet, I was hooked on the show until the end. Our dear (may I say wretched?) protagonist seem to find some respite from the onslaught of bad karma in the church community. But an untimely meeting with her son’s murderer robs her of the refuge. 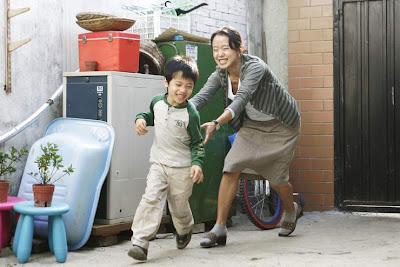 Shin-ae goes ballistic, sets out on self-destructive path and is sucked into a downward spiral of life that is hopelessness. How much can a woman take before losing all her marbles?

Kindness, if you like, comes in the form of mechanic Jong-chan (Song Kang-ho), a friend who sticks by Shin-ae through thick and thin.

When the flick focused on the Korean evangelical Christian community, I cringed and waited for the moment when the people and their belief are turned into a big joke, like in so many other films. Surprisingly, that moment didn’t come. The portrayal of the Christian community is accomplished without condescension.

The open-ended film – yes, one that ends on a dangling note – delves deep into human despair and threads on the delicate ground of (un)forgiveness. 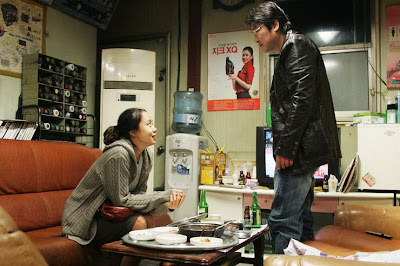 Have you heard?: ‘This role is gonna make me a bigger star than you.’

After hubby dies, Shin-ae (Jeon) and her young son relocate to her late husband’s hometown of Milyang to start life anew.

However, tragedy strikes again when her son is abducted and murdered. A local man Jong-chan (Song Kang-ho) stands by her through it all.

My copy from Beijing has really bad English subtitles. It’s so bad, I couldn’t even understand some parts of it and had to listen to the Korean audio for clarification!

Please get a better DVD. 😛