Is the Hallyu star cashing in on the food crisis we are currently experiencing?

I’m not so sure about this star, he’s already the top earner in Hallyuwood, he owns his own health food restaurant, but it looks like he’s still trying to make $$$ out of anything. 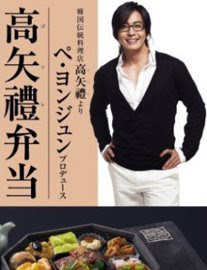 ‘Don’t like my lunchbox set Liz?
Well, eat me.’

Japan’s largest convenience store 7-Eleven will be selling special lunchbox sets of Korean food produced by Bae Yong-joon. The lunchboxes will be on the store shelves for three days from June 13 to 15.

The sets include 16 different dishes from the Goguryeo dynasty, such as bulgogi and ssam-bab. Whatever.

Just give me a fistful of rice and a couple of side dishes and I’m set. No one owns a money tree in their backyard, you know. Paying so much for food is like eating gold. The targeted suckers group for the set lunch are middle-aged female Yonsama (Japanese ajumma) fans. No surprise there.

Would you buy a RM76.58 bento set that has been mass-produced at a food factory with a sticker of Bae Yong-joon slapped onto the label so they could hike up the price?