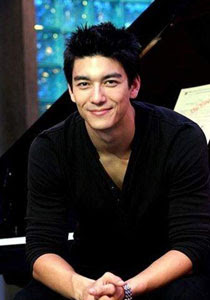 Is he another Daniel Henney-type who is using Korea as a launch pad into US showbiz?

Korean-American Dennis Joseph O’Neil or Dennis Oh kick started his career as a model at 16.

The story goes: Dennis was in the basement of his home working out when a plug on a modelling contest was heard over the radio airwaves. The teenager decided to try it out for giggles and that fateful competition marked his path into showbiz.

Dennis travelled to many Asian countries (Hong Kong, Singapore and Taiwan) during his modelling stint. The art major even changed his major to photography to help him model better. Another reason: he plans to become a professional photographer once he retires from the entertainment industry.

While modelling in South Korea, Dennis was spotted in 2005 by producer Ko Dong-sun, who promptly cast the talent in the MBC drama Sweet Spy.

After that, the model-turned-actor bagged another role in the 2007 SBS drama Yuhee the Witch (hey, that was recently shown on 8TV in Malaysia! Nope, didn’t watch it because the Mandarin dubbing sucks).

At the time of writing this profile, Dennis is said to be working on another MBC drama entitled East of Eden.