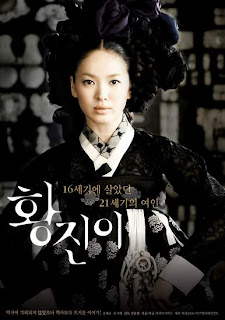 Hwangjiny is one difficult movie to watch because it leaves the viewer wondering what on earth is going on.

It’s not convoluted, but it does get absurd. Also, there’s no solid storyline or “train of thought” as the story unfolds. What were screenwriters Kim Eun-jeong and Kim Hyeon-jeong thinking when they wrote the screenplay?

First of all, the romance, which is central to the plot, lacks oomph. The chemistry between the legendary courtesan Hwangjiny (portrayed by the beautiful Song Hye-kyo) and the dashing rouge hero Nomi (Yoo Ji-tae) is non-existent. Sure they make a gorgeous onscreen couple, but their romance remains unconvincing.

Hwangjiny and Nomi are childhood friends. She is the daughter of a rich and powerful man while Nomi was a servant boy. He fled from the household after an incident and the story picks up after he returns many years later.

But soon, a dark secret about Hwangjiny’s past is revealed and she is forced to relinquish her position in the family to become a gisaeng. 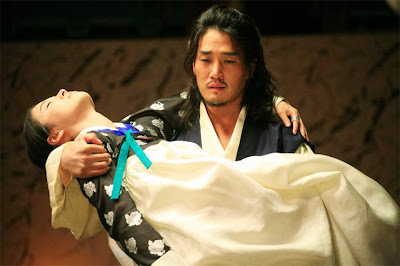 Tortured: Nomi (Yoo Ji-tae) is upset because he turned
his woman Hwangjiny (Song Hye-kyo) into a prosti gisaeng

Horror of horrors, Nomi confesses that he is the man who divulged her secret because he wants her for himself. Since he is still a servant, which makes her still out of his reach, he thought he could make her his by hurling dirt on her good reputation.

However, he feels too much guilt after the nefarious deed is done so decides to leave Hwangjiny (even after she begs him to stay and take her as his lover!) to live a life as a tortured, nomadic scoundrel.

What the fish is going on?! You got the chick, dude! You destroyed her life. She has no one except you and you b100dy leave her? Sick man.

And so the movie continues with their separate existence. Hwangjiny rises to become the most wanted gisaeng in the region. She’s smart and apparently very skillful in the art of seduction. However, we only get to see a display of her skill once, when she takes on an uppity scholar and eventually shames him in the presence of his friends. 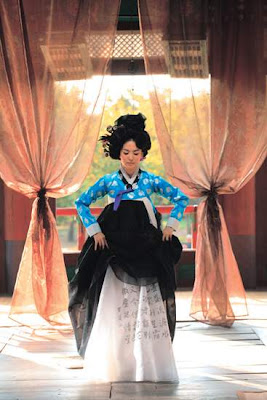 Scholar: Hwanjiny (Song) ran out of paper but discovered an
ingenious way to write her thoughts down

The virginal and angelic Song Hye-kyo is in the lead, so don’t expect Untold Scandal-like steamy scenes. The seduction and love scenes here are PG-rated or for the Malaysian audience, U-rated.

Meanwhile, Nomi rises to become a notorious robber – the most wanted man in the region. When the star-crossed lovers cross paths again, Hwangjiny devises a plan to prevent Nomi from being arrested and executed. 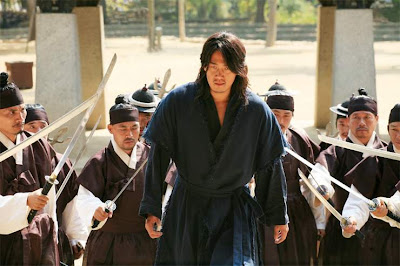 Scoundrel: Nomi is a 나쁜 남자

It may sound simple and straightforward here, but try watching the flick. At times, you can’t quite make heads or tails of the situation.

Poor Song Hye-kyo, I think she tried her best – looking gorgeous and all – but her character, along with Nomi, just didn’t click with the audience.

As a viewer, I didn’t feel a connection to Hwangjiny at all, thus could not sympathise with her. As for Nomi, I guess you know how I feel about him already.

Two beautiful yet underdeveloped characters are like pretty book covers without substance. Nice to look at, but a waste of time and/or money.

Supposedly a take on the life and love of famous 16th century gisaeng Hwangjiny, who is noted for her exceptional beauty, charming quick-wit and extraordinary intellect. 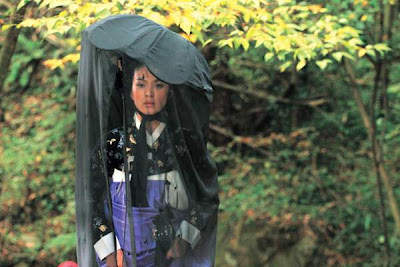 Hwangjiny The Movie attempts (but miserably fails) to shed light on the legendary courtesan.

Fellow Malaysians, beware of the copies distributed by a certain All Zone Entertainments. The English subtitles don’t make sense at all, so you’ll have to switch to the Bahasa Malaysia subtitles.

Other language subs are Chinese and Korean. Don’t know whether they work as well as the BM one because I can’t read Chinese.

Like the review? Check out K-popped!‘s other reviews here.