It’s about time Top Hallyu star Bae Yong-joon gets his share of airtime on Malaysian TV :-). Read on to find out what Yonsama shows are about to be shown:

Bae Yong-joon’s fantastical epic drama will be aired on Astro Shuang Xing tonight! However, the bad news is, you’ll have to be a subscriber of the New Emperor package to be able to access the channel. We didn’t purchase it, so no Bae Yong-joon to watch tonight.

According to Yokee of BYJ’s Malaysia Family, there will be 32 episodes as the series has been edited from the original 24 to better fit the time slot.

In celebration of KBS World’s 5th anniversary, the Bae Yong-joon/ Choi Ji-woo smash hit drama Winter Sonata will be aired every Saturday in July. Four episodes will be aired consecutively from 10am onwards!

Ah, excellent for me as I have not watched the series…oh no, wait, I have something on this Saturday…ack! And I don’t have Astro Maxx! I guess no BYJ for me this week :-(.

Anyway, if that’s still not enough, you can always join the BYJ Malaysia Family. Did you know that during their recent party to celebrate the Family’s 5th anniversary, the gals received an autographed picture from hunky oppa himself? Mmm hmmm, check it out below ;-). 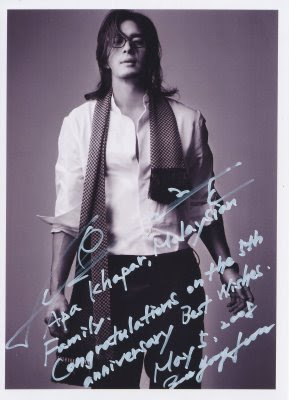