Story by Liz
Photos by Orchid

Hi all, now that the dust has settled, here’s a closer look at the MTV Asia Awards 2008 Pre-show Press Conference on Aug 1.

MTV VJs Utt and Denise Keller were the MCs for the Marathon Press Conference (MPC) at the Resort World Hotel, Genting Highlands. Why do we call it an MPC? Well, because it started at 3pm and only ended at about 7pm! 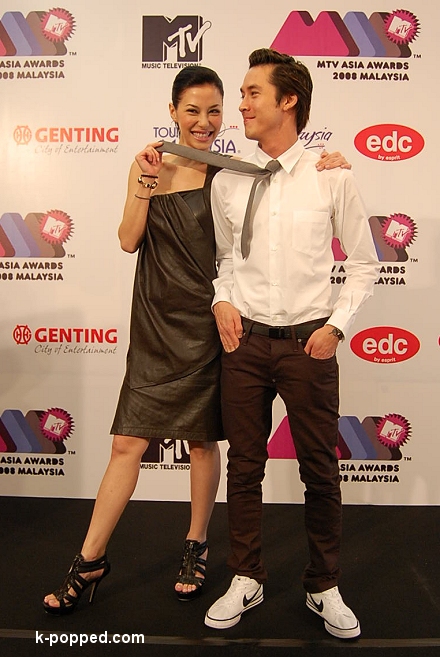 First up were speeches by the various sponsors, then the host of the award show – Jared Leto – was introduced/interviewed, followed by the unveiling of the MTV Asia Awards gold-plated trophy.

After that, there was a photo session before the mass interviews with the many artists began. 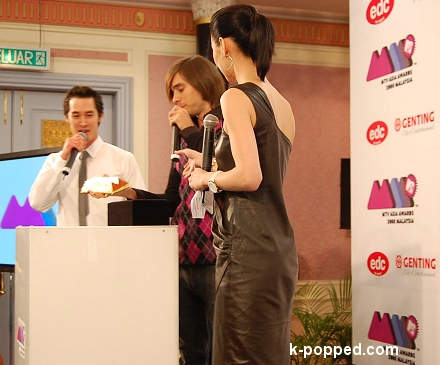 In demand: Photogs love Jabbawockeez too

The Script (minus one): ‘Aku cinta Malaysia.’
– I love Malaysia 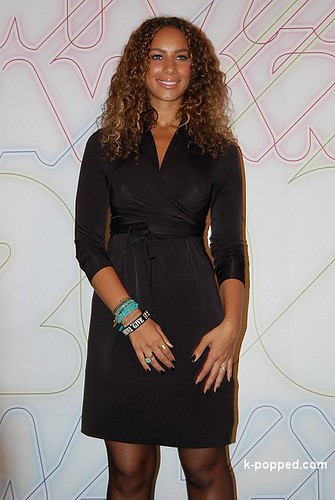 Poppin’ by: Leona Lewis had a less than
5-minute interview!

Laid-back: Panic at the Disco decided to have some
tea while answering questions

Yo there!: Electrico of Singapore is happy to be performing
at the MTVAA

K-popped! sat in for all the interviews except the final one with Stephanie Sun (Singapore).

Our beloved K-pop stars – Super Junior – only came towards the end of the MPC. They were the 3rd last artist to arrive, just befo
re the Pussycat Dolls.

Hurray for Hallyu stars!: The smartly-dressed SuJu made
an impressive entrance

After seeing so many casually-dressed artists (some even drinking tea while talking!), the smartly-dressed SuJu members were impressive when the nine of them walked into the room in their suits. Some of us started clapping when they arrived ;-).

Happy boys: Eeteuk (right) is all smiles as he answers the questions.
Giggling away is Sungmin (left) while Yesung “controls macho”.

Eeteuk (25) was enthusiastic and looked really cheerful as he deftly answered questions from the press. However, when it came to a question about Korean food, the eloquent leader decided to hand the microphone over to Eunhyuk :-).

The rest of the boys didn’t say anything but smiled a lot, except maybe for Heechul who seemed to be catching 40 winks throughout the interview. Late night, huh, Heechul sshi?

Finally, the Korean-English interpreter was OK – at least he was better than the lady at the FT Island press conference.

However, my gripe is that he spoke too softly and my recorder could not pick up some of his interpretation. It’s hard to find good interpreters these days, huh? I guess I’d better work harder on my Korean then – not to interpret, but to understand the stars ;-). 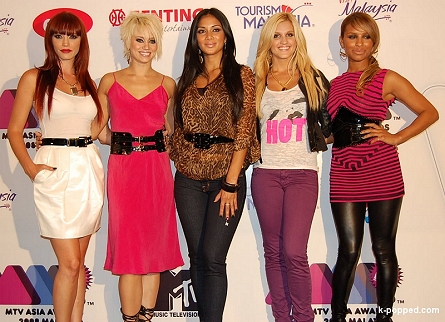 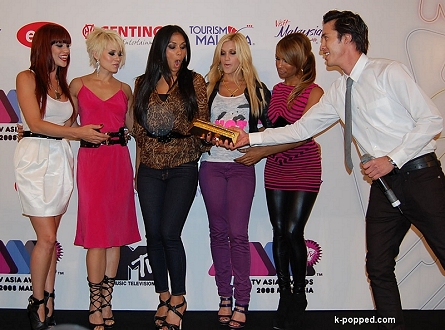 Surprised: ‘Wow, what an expensive bar of Toblerone choc.’ 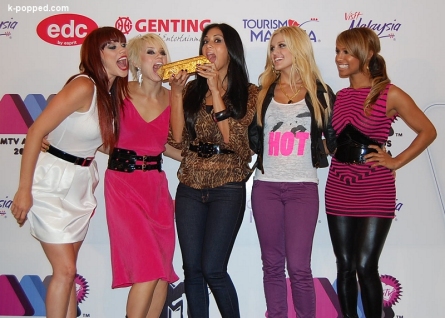 Yummy: The girls want a bite of the MAA trophy

Up next: Super Junior on the Red Carpet!