Okay, here it is, fans of Super Junior…this is for you. A blow by blow of what happened on the Red Carpet when 11 of them arrived at the 2008 MTV Asia Awards in Genting, Malaysia! At the ceremony, they won the Favorite Artist of Korea award.

Of course those of you who were there could chip in and give an account in our comments section. Did anyone of you get their autographs? Or perhaps a kiss on the cheek by the handsome oppas?

Super Junior arrived on the Red Carpet right after the Pussycat Dolls. Before i could even catch my breath after all the excitement, SuJu walked up like so… 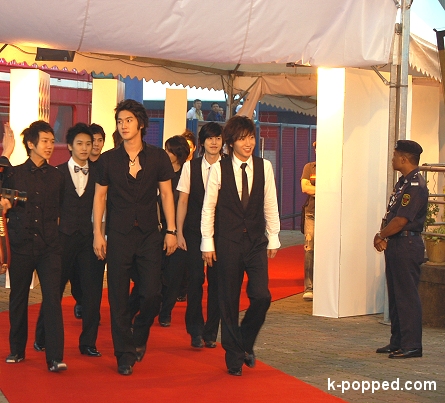 Super Junior arrives at the 2008 MTV Asia Awards –
all dressed in black & white. Dashing Shiwon in all
black (with V-necked shirt) and Eeteuk was in front. 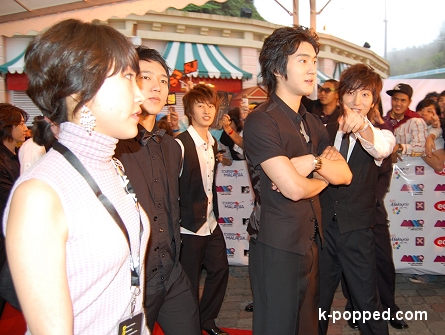 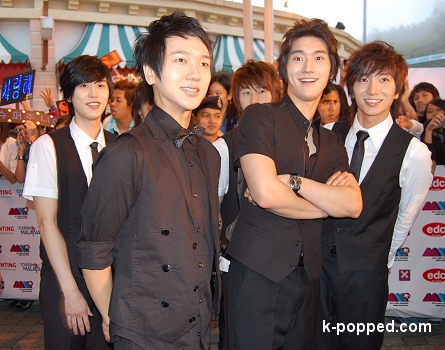 After that brief interlude, it’s back to business on the Red Carpet and leader Eeteuk lines the guys up for a group photo. 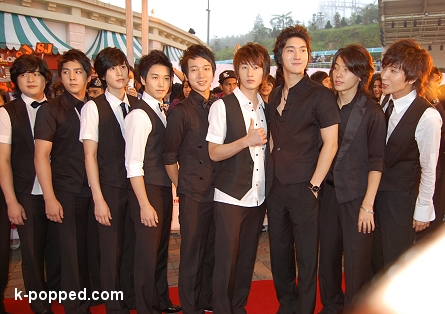 Eeteuk rounds up the group while Eunhyuk thinks
Shiwon looks great and gives him a thumbs up. 😉

They decide to do their signature move and Eeteuk shouts “We are Super Junior!” 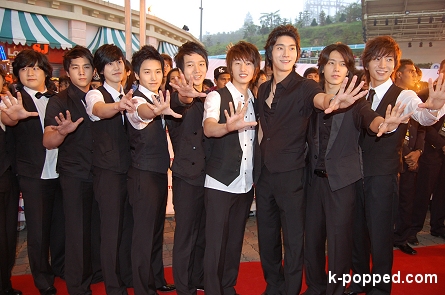 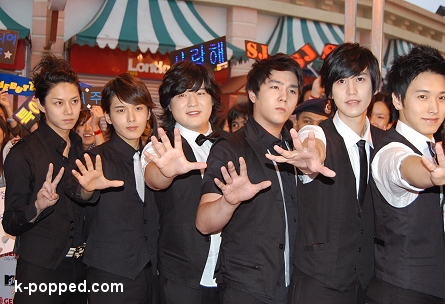 Heechul (far left), usually out of sync with the rest rebels and
shows a peace sign instead. Kangin doesn’t look happy and
hasn’t smiled since he walked up the Red Carpet.

After posing for a bit, the boys paused for awhile (maybe because Pussycat Dolls were further in front), and didn’t quite know what to do. They were looking around and absorbing the atmosphere. Fans were screaming on their left (very loud okay!), photogs were clicking away on their right.

It was at this point that i screamed at the top of my lungs “Shindong! 여기 보세요. 여기 보세요!” (Shindong! Look here. Look here!). He heard me, and turned to pose. Ryeowook joined him too! 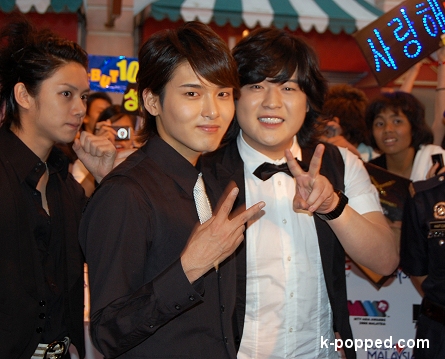 After that shot, they still had not moved on. Hmmm…what should i do next? Should i try to make the moody-looking Kangin smile? Why not? And so I called out “Kangin! 여기 보세요!”. I was so happy when my attempt at communicating on the Red Carpet worked and Kangin turned and cracked a smile into my camera. 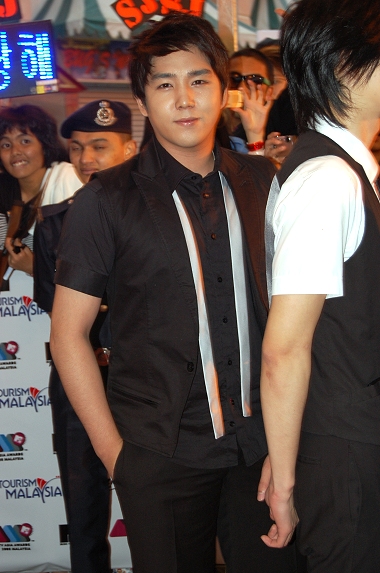 Kangin smiles a bit after some prompting 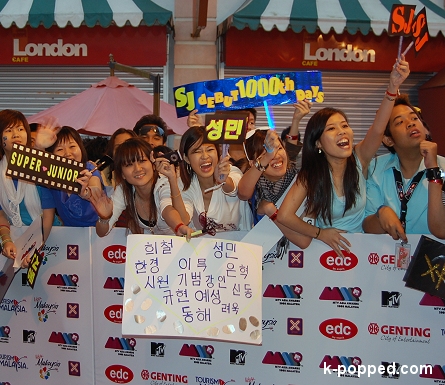 Super Junior fans cheering and screaming wildly!
They remind the hardworking boys that it’s been
1000 days since they made their debut. 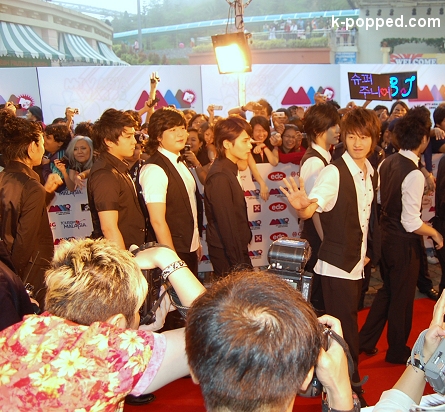 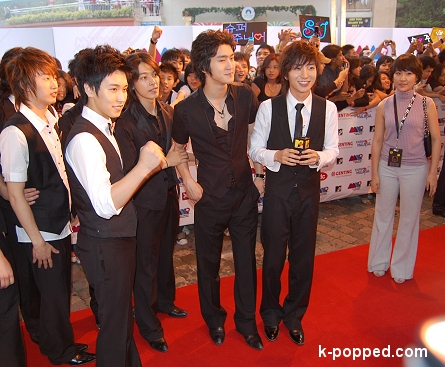 Next it’s time for the video cameras.
Eeteuk says a couple of words on MTV Asia. 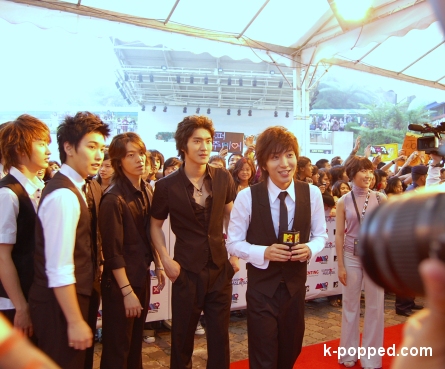 What did you say? It was very difficult to hear
the reporter above the din.

Then before i knew what was happening, Shindong breaks into a little dance for the benefit of the video camera. 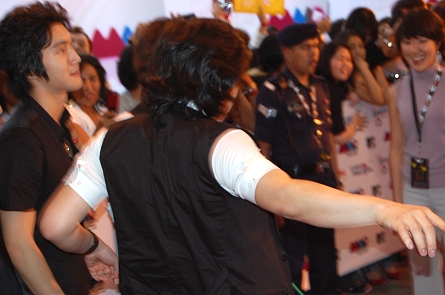 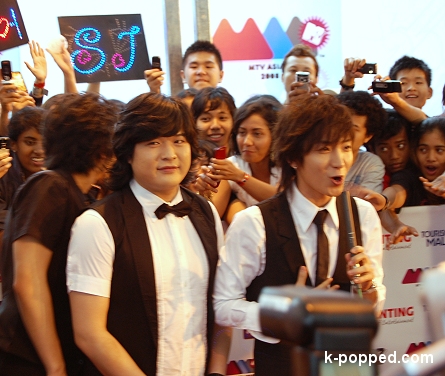 Eeteuk goes on to speak to the next video crew and Shindong
(after the dance) appears shy and sheepish. Ha ha so cute.
While handsome oppa (Shiwon) is busy entertaining fans. 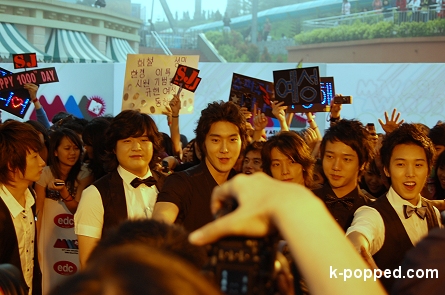 After some more posing, they
disappeared into the Arena of Stars.

More on the 2008 MAA and Red Carpet photos soon…