Words by Liz
Photos by Orchid 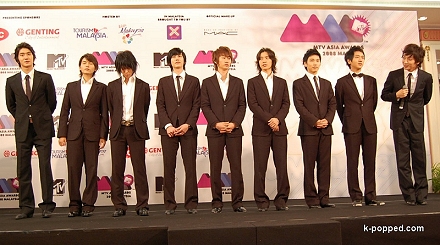 안녕하세요 말레이시아!: The SuJu boys are excited and happy to be
at the 2008 MTVAA…except maybe Heechul (3rd from left),
who seems to be sleeping.

Looking absolutely spiffy in their black suits, Super Junior fielded questions from the press, including from K-popped!

How does it feel like to be a nominee at the 2008 MTV Asia Awards?
Eeteuk: I’d like to thank everyone for inviting us to the MTV Asia Awards. As a representative of the Favourite Korean Artist Award, we will give our best performance tomorrow night.

You just had a concert in Thailand last month, how do you feel about it?
Eeteuk: We would like to thank our fans for showing up at the concert and for their love and support.

When you were singing (at the concert), why were some of you crying?
Eeteuk: Even though they didn’t know the language, all the fans sang along to the words – they knew the lyrics. We were touched. 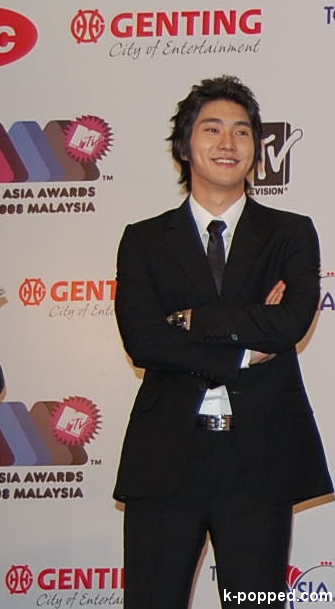 I hear that not all 13 members will be here for tomorrow’s show. Who isn’t here and why?
Eeteuk: Kangin and Shindong are not here now, but they are on the way; Hankyung is participating in the Beijing Olympics ceremony so he can’t make it and Kibum is shooting a drama series in Korea.

Is Super Junior returning to Malaysia for a Super Show concert?
Eeteuk: We will definitely be stopping by Malaysia for this tour and we would like to thank you for welcoming us each time. We would definitely come.

All of you are so well-dressed today, how did you think up of the look?
Eeteuk: Our stylist picked out our clothes today. 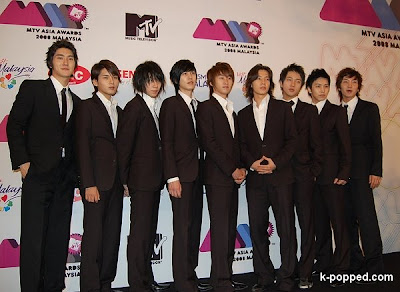 What is the strangest Korean dish that you would recommend a courageous person to try?
(The smiley Eeteuk passes the microphone to Eunhyuk for this question)
Eunhyuk: There are a lot of Korean food such as kimchi and bulgogi but we would recommend Samgyeopsal, a pork belly soup dish which we highly recommend. When you come to Korea, just go: “삼겹살 주세요”. (samgyeopsal juseyo = Please give me samgyeopsal).

Last time you came to Malaysia for a photoshoot and as a guest artiste for DBSK. Do you remember any Malay words that you have learned?
(Randomly from the boys) Terima kasih…Apa khabar? (Thank you and How are you? respectively).

As a successful Korean band, did you have to sacrifice a lot to get to where you are today?
Eeteuk: First of all, we have to give up having a girlfriend. By giving up having a girlfriend, we now have so many “girlfriends” all across Asia (steps up and points to all the ladies in the room, and laughs). 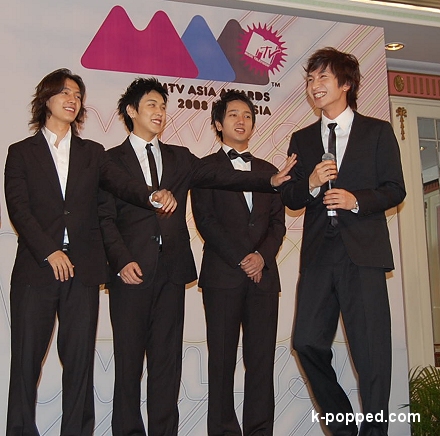 Ha ha ha: Eeteuk jokes about having many Asian “girlfriends”.

Will you make another music video in Malaysia again?
Eeteuk: We shot an MV in Kuala Lumpur and it turned out to be the best video we’ve ever shot. If we ever get a chance, we would come back to shoot another MV. 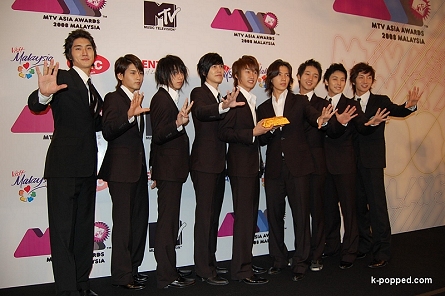 That’s it for today, people! Orchid and I are beat, and we have a full day tomorrow. Goodnight from Genting Highlands, the City of Entertainment 6,000 feet above sea level.

Kimchi kisses ♥ to everyone.

Show me all entries on the 2008 MTV Asia Awards Malaysia!