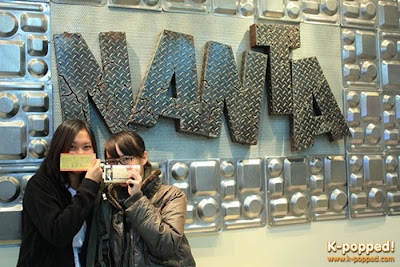 Ready for some cookin’: Rooster (right) and I showing off
our Nanta tickets 🙂

Believe the hype, folks – the Nanta (Cookin’) non-verbal live show lives up to its many good reviews and here is another one. 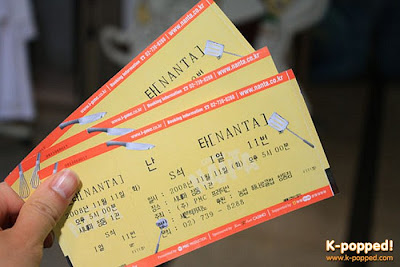 We made our way to the GangBuk Nanta Theater for the 5pm show on Pepero Day – a perfect ‘lil end to our first vacation in the land of the Hallyu.

A quick check shows that the White Team will be taking the stage. Here’s the cast list:

The story is simple. Three chefs – Head Chef, Female and Sexy Guy – are ordered by the Manager of the restaurant to prepare a lavish wedding banquet within an hour – by “6 o’clock”. 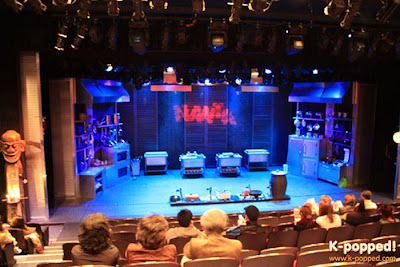 Clean kitchen: The set up before the show

He brings his Nephew to work with the chefs. Initially, the chefs give the newbie the cold shoulder, but they soon warm up to the mischievous boy as they work together on the meal.

Apart from the fall-off-your-seat-laughing comedy, the highly entertaining show incorporates the Korean traditional Samulnori rhythm – a hypnotic beat that enthralls and captivates.

Nanta, which is known the world over, has been running since Oct 1997 and is voted one of “the 10 most famous tourist attractions in Seoul” by the Korean Tourist Service.

The show is such a riot – the comedic timing and chemistry among the actors are delightful. From doing acrobatic-like feats to banging on pots and pans to a mesmerising rhythm, Nanta doesn’t fail to entertain the audience. 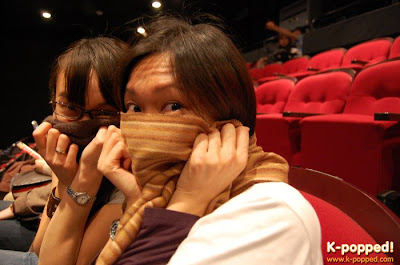 Goofing around: Rooster and I entertain Orchid before
the real show starts

Whether it’s the slapstick comedy or the spirited percussion play, the actors seem to execute their parts effortlessly and flawlessly. Also, it is obvious that the actors are enjoying themselves (more on that later).

True to its description, there is minimal dialogue in the show since it is all about body language and the most universal of all languages – comedy!

One of the strengths of the show is the intimate setting of the theatre. The GangBuk Theater we went to is actually the largest with a 324 seating capacity. Nonetheless, it is cosy enough for the actors to interact with the audience, making the cast so much more “accessible”. 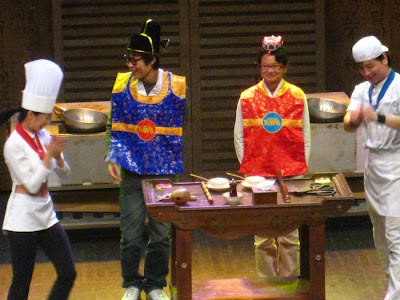 Bride & Groom of our show: Unsuspecting members of the audience
recruited as extras! – Pic taken from Nanta Official website

To make the Nanta experience even more personal, members of the audience are recruited for some of the scenes! Just be prepared during the soup-tasting and dumpling-making sequences ;-).

With such a cosy atmosphere, expect the actors to take the opportunity to poke fun at the audience, cajole the audience to cheer and clap louder…and oh, conduct a clap-off among the crowd.

At one point in the show, the Head Chef conducted a clap-off among the audience. Dividing the crowd down the middle into two groups, he tried to get us to mimic his rhythmic claps. 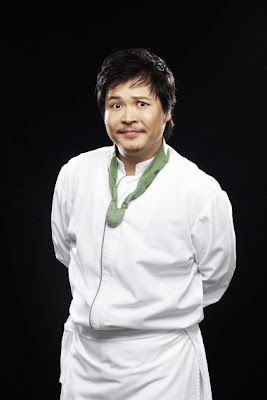 Head Chef: Actor Kwon Dae-hee had a tough time
getting the crowd to clap to his rhythm.
– Pic taken from Nanta Official website

It was a tough crowd that evening as an ahjumma kept foiling the rhythm! It got so exasperatingly funny that the Head Chef had to break character and take a moment to regain his composure. The crowd cheered loudly.

Apart from that, the blossoming romance between Female and Sexy Guy was adorable especially so when the Nephew (my personal fav) kept butting in at the most opportune times.

Comic relief also came in the form of the Manager, who’d come into the kitchen periodically to bark orders at the team. 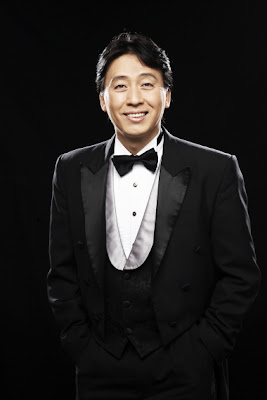 With so much going on, it was amazing that the little details of the show were not overlooked. Take for instance the scene where the chefs were cooking soup. The aroma of soup being cooked actually filled the air! Also, the chefs deftly displayed their “cooking skills” with sharp knives, a wok and fire! 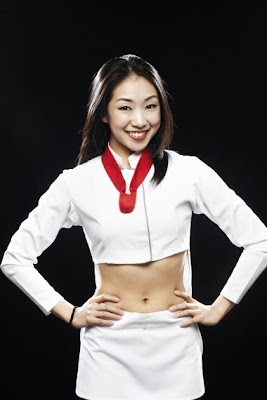 Female: The lovely Hwang Yoo-kyung is the
rose among the thorns.
– Pic taken from Nanta Official website

Guys, your eye candy comes in the form of the Female chef who goes about the kitchen in an abs-baring uniform. 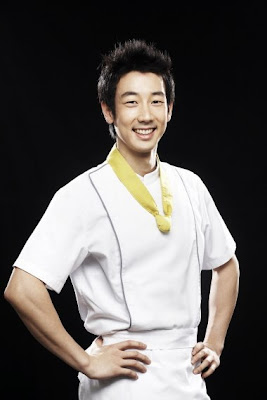 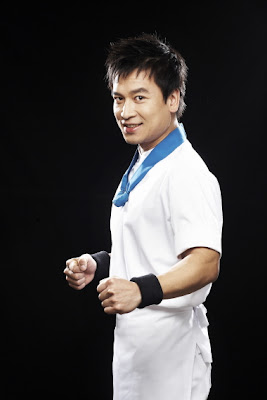 Ladies, you have a choice between the Sexy Guy or Nephew, both of whom show off their sculpted torso during the percussion grand finale – awesome! – and I mean the percussion play, OK :-P. Ha ha, yeah right. 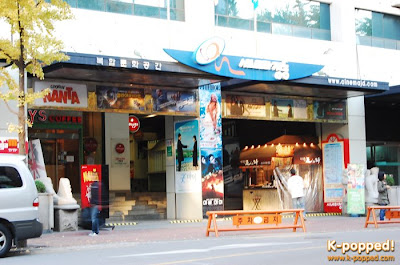 Outside looking in: The GangBuk Nanta Theater 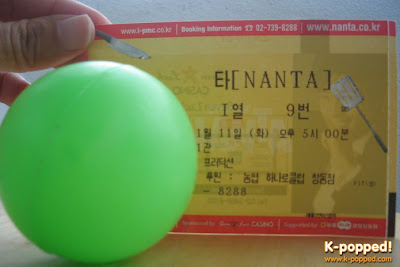 My Nanta memorabilia: The green plastic ball (left) was one of the colourful balls
thrown into the audience by the cast. Yes, 미안합니다, I took one home :-P.
Wish I could get it autographed, but the cast did not reappear after the show :-(.

Check out other K-popped! Trio in Seoul entries:
Watching Rain on TV everynight in Seoul
Pepero Day is celebrated on 11.11
Happy Pepero Day!